Moving to Tampa? Here's What Living Here is Like | North American

Here's what its like to live in Tampa, FL

Thinking about moving to Tampa, Florida? Tampa is situated on Tampa Bay on Florida's west coast, near the Gulf of Mexico. The city is one of the largest metropolitan areas in the southeastern United States and houses Florida's biggest and most important port. The Tampa Bay Area includes Tampa, St. Petersburg, Clearwater, and their four surrounding counties. Greater Tampa also encompasses Sarasota.

If you are considering a long-distance move to Tampa, you are not alone. Tampa itself has an estimated population of over 385,000 people, while over 4 million people reside in the Greater Tampa area. The prosperous city continues to grow at an impressive rate, with individuals, couples, and families drawn to work opportunities in the area as well as the vibrant arts, culture, and quality of life available in the Tampa Bay region. 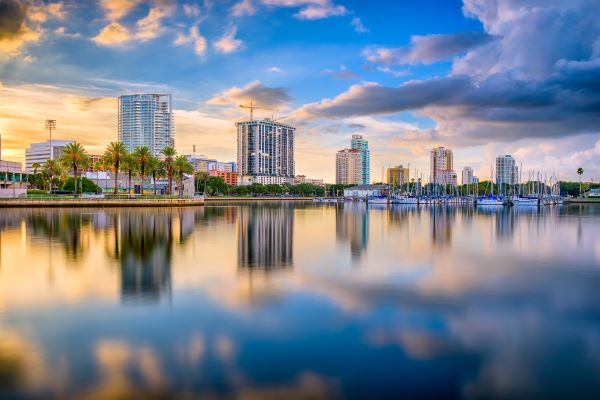 Life on the Bay in Tampa

The city of Tampa stretches across 175.3 square miles, according to the United States Census Bureau; although 61.8 miles of that is water. The topography is low-lying, only rising 48 feet above sea level at its highest point. Tampa Bay is formed by two distinct bays that are known as Old Tampa Bay and Hillsborough Bay.

Water surrounds the city on all sides, from the Gulf of Mexico and Tampa Bay on the west to the Hillsborough River, which passes right through Downtown Tampa. The smaller Palm River flows east of the city into McKay Bay at the northeast side of Hillsborough Bay.

Summer in the city is hot and humid, and thunderstorms are common. Summer temperatures typically range from the 70s to the 90s. The hot weather fosters lush vegetation, so in Tampa, you may spot coconut and royal palms. The city marks the northernmost point at which the plants can typically grow and thrive.

The humid subtropical atmosphere of Tampa makes it a haven for those who despise winter weather. Tampa residents enjoy dry, mild winter weather ranging from the 50s to the 70s. This means winter in Tampa is still the perfect season for fishing, boating, golfing, or any other outdoor activity you'd like to pursue.

Given its location right on the Gulf of Mexico, Tampa is quite vulnerable to storm surge and damage from tropical storms and hurricanes. Global warming is also becoming a concern as sea levels rise and threaten waterfront developments.

Tampa has not been majorly affected or hit directly by a storm since the 1920s, but should a storm pass directly over the city or hit it from the south, the city would likely experience severe property damage. Residents are advised to listen closely to any city or state weather warnings and to prepare adequately or evacuate if needed.

When you understand the history of a place, it's much easier to understand its present-day culture. Tampa has always been a port city and hub for maritime activity. Over the centuries, its diverse population has evolved and assimilated new influences and new traditions.

The first Tampa Bay area residents settled along the coast thousands of years ago. These native tribes included the Calusa, the Tocobaga, the Pohoy, and more whose names have been lost to time. The earliest known mentions of the Tampa name came from the native Calusa, who called it "Tanpa." The Calusa were followed by the Spanish under Hernando de Soto and Panifilo de Narvaez. The Spanish never really established a firm foothold in the area, and after first contact, the area remained largely depopulated for several hundred years.

The U.S. gained control of Florida in 1821, at which time the Seminole resettled in the area. The United States opened Fort Brooke in 1824 on Tampa Bay, and the city, then known as "Tampa Town," was incorporated in the 1840s, within a few years of Florida joining the Union.

Florida seceded during the Civil War, and Tampa became an important port for blockade runners. This situation eventually led to the Battle of Tampa, the Battle of Fort Brooke, and the Battle of Ballast Point. The skirmishes completely destroyed the fort, and the only traces that remain to this day are two cannons you can see on the University of Tampa campus. The Tampa Convention Center stands on the former Fort Brooke site.

Phosphate was discovered in the 1880s in the southeast Bone Valley region, and the mineral continues to be important to Tampa's economy. This, together with the arrival of the railroad and the continuing boom in commercial fishing drew many new Cuban, Italian, Jewish, Eastern European, and Spanish immigrants to settle in Ybor City and West Tampa.

Once you move to the city, you'll become a "Tampan" or a "Tampanian,” depending on who you ask. Others might call themselves tampeños. This diversity of viewpoints is reflected in the array of neighborhoods that make up Tampa and the Greater Tampa Bay Area, and each has its own character, landmarks, and culture. Here are some of the best-known Tampa neighborhoods, to help you decide which is the best fit for you:

Tampa's booming population means that just like in any large city, traffic congestion and parking can be a problem downtown. The city has heavily invested in alternative transportation options to help you get around easier than ever, even if you don't have a car.

If you do need to get around Tampa in your own car, there are numerous major routes that will connect you easily with downtown and outlying communities, whether you're traveling to Lakeland in the east or St. Petersburg in the southwest.

Situated to the east of the city, Interstate-75 runs roughly north-south, before eventually redirecting across the state to Fort Lauderdale. Connect to Interstate-275 just north of the city to cut right through northern and northwestern Tampa, cross the Bay, and head into St. Petersburg over the Sunshine Skyway Bridge. East to west, Route 4 connects Tampa to Lakeland and connects to I-75 and to I-275.

If you'd rather stay local and enjoy a scenic drive, cruise down Bayshore Boulevard, which skirts the Bay just east of historic Hyde Park.

Things to Do in Tampa

If you're just getting to know Tampa, there's no better place to start than by spending time at the Tampa Riverwalk. Here are a few highlights you will encounter along the way:

Outside of the Riverwalk, you'll find there are many more Tampa Bay arts and cultural sites to explore, including:

Tampa residents enjoy access to over 165 different parks and beaches and an additional 42 public spaces in the suburbs. Some of those highlights include the Tampa Riverwalk, which stretches over 2 miles long and offers excellent views of the downtown Tampa skyline. If you're a skateboarder or simply want to watch the local pros in action, head over to the Bro Bowl, one of the first substantial skateparks established on the East Coast back in the 1970s.

Animal lovers enjoy visiting Lowry Park Zoo, with over 2,000 animals, the Florida Aquarium, and Big Cat Rescue, which is home to lions, tigers, cougars, and more. Busch Garden's coasters get all the publicity, but the park also offers the opportunity to interact with African wildlife.

Many traditional shopping malls in Tampa have been converted to office facilities or other uses in recent years, as locals now prefer to visit mixed-use developments and shop locally in their neighborhoods. Tampa residents head to International Plaza and Bay Street, the WestShore Plaza, Hyde Park Village, and the SoHo district to shop. Suburban communities in New Tampa and in Brandon offer more options for outdoor shopping malls, strip malls, and big box stores.

Dining in Tampa is a delight for foodies who love fusion and Latin-inspired cuisine. The Cuban, Spanish, Italian, and international immigrants each left their stamp on the Tampa food scene of today.

Tampanians love variety and celebrate this fusion, something you can experience and taste for yourself at Tampa's new food halls like the Hall on Franklin and Armature Works. You can't miss a visit to Columbia Restaurant is the state of Florida's oldest restaurant. This is the perfect place to taste Tampa's famous Cuban sandwich. If you're feeling spontaneous, just take a drive through Ybor City, Seminole Heights, and South Tampa, and no doubt you'll spot food trucks, fine dining establishments, and cafes you'll want to check out.

The food in Tampa is so good that many restaurants have become chains or have their headquarters in Tampa, including Bonefish Grill, Outback Steakhouse, Carrabba's, and The Melting Pot, to name a few.

If you're looking for a good time in Tampa at a bar or lounge, here are a few favorite spots to check out in Ybor City and beyond:

The first brewery came to Tampa's Ybor City in 1896, and now a new wave of Bay area breweries is carrying on the tradition:

Tampa has been described by Maxim magazine as one of America's biggest party cities. That party city reputation also extends to Tampa's impressive slate of annual events. The city's festival season unofficially runs from January to May, but in truth, there are events happening in Tampa all throughout the year.

Tampa's flagship annual event is the Gasparilla Pirate Fest in January. A festival which first took place in 1904, it was named in honor of local pirate Jose Gaspar, who is supposedly the last of the pirates who terrorized the Gulf of Mexico and southwest Florida in the late 18th and 19th centuries. No one can be sure if he actually existed, but he certainly does in the mind and hearts of Tampanians.

Ye Mystic Krewe of Gasparilla, a civic association established the Tampa tradition of staging a mock invasion of the city followed by a memorable parade, and now more than 50 local krewes of pirates help throw the festivals each year. In recent years, Gasparilla has evolved into a whole season of pirate-themed events, including:

The city also hosts a good mix of family-friendly events and festivals geared to a more mature crowd throughout the year, so everyone from families to art lovers and partygoers can find things to do that fit their interests. Here are more highlights from the Bay Area's favorite annual events:

Life in Tampa Bay is full of sunshine, fun, and festivities. Whether you choose to settle down in quiet Plant City, move to historic Hyde Park, or find your home in a luxury high-rise in downtown Tampa, soon you'll be living like a local and enjoying all that Tampa has to offer.

Contact us to get a free quote on your cross-country move.