Moving from San Francisco to Seattle

Moving from San Francisco to Seattle

Despite its reputation for being rainy and cloudy, Seattle is one of the most beautiful cities in America. Boasting beautiful scenery, a booming economy, and loads of outdoor activities, there are plenty of reasons to love living in this Pacific Northwest city. Seattle is constantly growing and attracting newcomers thanks to its fast paced environment and unique local culture. As you prepare to move from San Francisco, here are some of the highlights of life in the Emerald City. 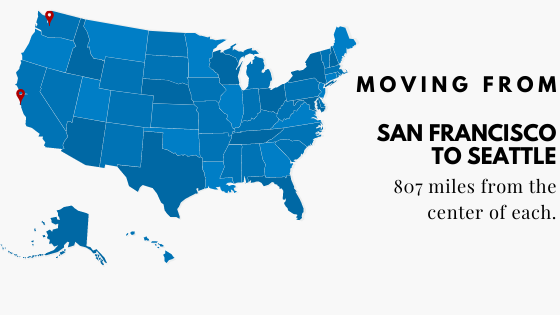 Benefits of Moving from San Francisco to Seattle

Seattle’s natural beauty is one of the biggest draws for residents. It is surrounded by both mountains and water on two sides, making for some truly spectacular views. Despite being an urban metropolis, it still boasts plenty of nature both inside and outside of the city. Newcomers are often mesmerized by the majestic Mount Rainier as well as the shores of the Puget Sound. The city is also filled with loads of green space and plenty of parks.

The city attracts young professionals from all over the country who flock to the city for work. The unemployment rate is below the national average and the number of jobs is constantly growing. Not to mention, the median income in the state is 26% higher than the national average. Seattle is home to globally renowned companies such as Amazon, Starbucks, Nordstrom, Costco, and Microsoft just to name a few. It also rivals Silicon Valley when it comes to tech jobs, with more and more tech companies setting up hubs in the city. In fact, nearly 11% of Seattle’s workforce is employed in tech. Other major industries include business and scientific services, retail trade, manufacturing, healthcare, education, and food services.

Seattle’s location offers easy access to a variety of outdoor activities thanks to the mountains, ocean, desert, and forests. Popular activities include hiking, climbing, camping, skiing, kite surfing, backpacking, fishing, and cycling. Packed with parks and hiking trails, there are plenty of opportunities to get outside and explore the outdoors. There are even tons of ways to enjoy the outdoors with your pooch. The city has tons of dog parks and is even ranked #1 for dog-friendly cities.

Considering all that Seattle has to offer, it might surprise you to find that it is actually more affordable than one would expect. This is especially true in comparison to San Francisco. In fact, the overall cost of living is nearly 52% lower in Seattle than San Francisco. The biggest factor in the cost of living difference is housing, with the median home cost coming in nearly 92% higher in San Francisco. In addition to cheaper rent and more affordable real estate, you will also find that groceries, utilities, and healthcare expenses are also cheaper in Seattle.

As the home of coffee giant, Starbucks, it should come as no surprise that Seattlites have an affinity for the beverage. One study even suggests that people in Seattle drink more coffee than any other city in the country. With roughly 15 coffee shops per 10,000 residents, finding a place to enjoy a cup of brew is easy. However, coffee isn’t the only popular drink in the city. Seattle is also home to a number of breweries and the city even hosts an annual Beerfest where locals can taste flavors from all of the local breweries. In addition to great drink options, Seattle is also a premiere destination for foodies. Here you will find some of the best restaurants in the country, featuring everything from up and coming eateries to well-established restaurants.

Whether you have kids or not, it is always beneficial to move somewhere with a strong school system. The Seattle school system is the largest in the state and ranks 9 out of 10 according to Great Schools. In addition, Seattle is also home to three universities including The University of Washington. These great schools have led to a well-educated population, and Seattle ranks #1 as the most well-read city in the country.

Cost of Moving from San Francisco to Seattle

A long distance move can be costly and that’s why it’s important to work with a moving company that is both professional and affordable. North American understands that it’s important to budget these moving expenses and that’s why we offer upfront pricing and competitive rates. The average cost to move from San Francisco to Seattle with North American is $2,416.78. Of course there are many variables that will determine the actual cost such as exact distance of the move, the number of items being moved, and additional services such as packing and unpacking. The best way to get an accurate quote is by using our Quote on Demand tool listed above. 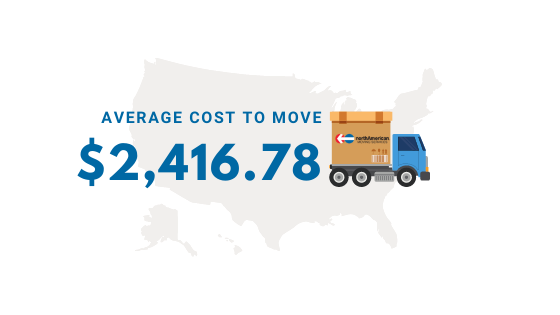 How to Move from San Francisco to Seattle

Moving from one state to another can present a number of challenges but North American can help you every step of the way. We provide expert moving services such as packing, transporting, and unpacking and can help you coordinate all of the logistics for your long distance move. North American has over 85 years of moving experience so we know exactly what it takes to handle interstate moves. Our team of professionals can provide expert advice and will work to ensure your move is as easy and stress-free as possible.

Call North American today for a free quote and find out how we can help with your relocation from San Francisco to Seattle.