Chicago is one of the most beloved cities in America, and for good reason. It’s rich in history and home to some amazing food, music, theater, museums, and schools. It is a popular tourist destination, with landmarks like the Magnificent Mile, Millennium Park, and the Willis Tower, but it is also a perfect place to lay down roots. Located on the shores of Lake Michigan, Chicago offers natural beauty, plenty of outdoor activities, and great employment opportunities for those looking to expand their career. While it’s tough to beat the bright lights and excitement of New York City, there is something truly special about the Windy City and its residents agree that it’s one of the greatest cities in America. 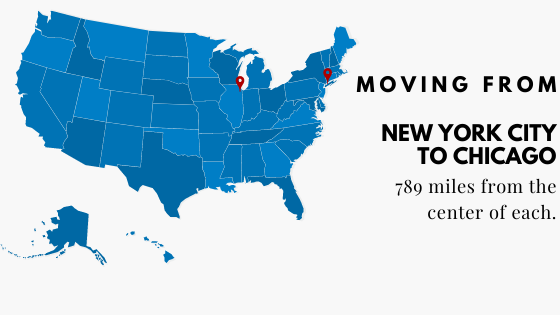 Benefits of Moving from New York City to Chicago

The city of Chicago has played an important role in the development of American culture, economics, and political history. Known as the American railroad capital, the city became a manufacturing and retail powerhouse in the early 1800’s when its railroads and canals helped it to become an important transportation hub between the eastern and western United States. This had a major impact on the American economy, thanks to the refrigerated rail car and the central location of the Union Stock Yards. The city has endured so much over the years, including the Great Chicago Fire of 1871and the Prohibition Era in the 1920’s, but the city’s resilience has helped it become the global leader that it is today.

Easy to Get Around

Despite its massive size, Chicago is quite easy to get around. It is a very walkable city, and with the second largest public transportation system in the country, it is very easy to get around without owning a car. There are several bus and rail options that make transportation easy and efficient throughout the city. There is also an authorized bike sharing system that you can use within the city. Chicago is also home to O’Hare International Airport, which is the second busiest airport in the world. This gives you easy access to plenty of regional and international flights, making it easy to travel in and out of the city.

Chicago isn’t exactly a cheap place to live, but compared to the exorbitant cost of living in New York City, you will feel like you have just gotten a raise. In fact, Chicago is nearly 42% cheaper than New York City. The median home price in NYC is a staggering $680,000 while it sits at just $229,000 in Chicago. In addition to cheaper real estate, you will also save money on utilities, groceries, transportation, and healthcare expenses.

Located along the shores of Lake Michigan, residents are treated to plenty of spectacular water views. It may not be the ocean, but it still provides beautiful beaches and access to water activities. During the summer months, people enjoy strolling along the lakefront and relaxing along the waterfront. With over 30 miles of beaches, there is plenty of space to enjoy a relaxing sunset by the water. It is also a great place to go boating and fishing.

Chicago offers an abundant number of work opportunities across a variety of industries. Among the top industries in the city are finance, publishing, manufacturing, and food-processing. It is also home to a number of Fortune 500 companies including Boeing, Archer Daniels Midland, Accenture, Abbott Laboratories, and United Airlines just to name a few.

Chicago has earned the distinction of being named the Best Sports City in America. The Windy City is home to two MLB baseball teams, the Cubs and the White Sox, the Chicago Bulls NBA team, the Chicago Bears NFL team, and the Blackhawks NHL team. There is something truly unique about the Chicago sports culture. Their energy is electric, their teams are fantastic, and their stadiums are national landmarks.

Best known for its world-famous hot dogs, Chicago is home to some legendary food. Among its most popular foods are pizza, polish sausage, gyros, and Chicago-style popcorn. Aside from these classic favorites, Chicago is also home to some of the highest rated restaurants in the world and plenty of celebrity chefs. It’s incredible food culture also helped lure the James Beard Foundation award ceremony from New York to Chicago.

Cost of Moving from New York City to Chicago

Moving long distances can be costly so it’s important to understand how this move will impact your budget. At North American, we understand how stressful moving can be so we work to offer upfront pricing and competitive rates so you don’t have to worry about breaking your budget. The average cost to move from New York City to Chicago with North American is $2,190.49. However, there are many variables that will determine the exact cost such as the actual distance of your move, number of items being moved, and additional services such as packing and unpacking. The best way to get an accurate quote is by using our Quote on Demand tool listed above. 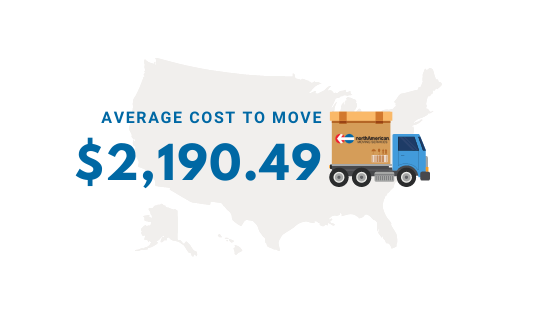 How to Move from New York City to Chicago

When you are moving a long distance, working with a professional moving company can help you stay on track. Since you won’t have the ability to make multiple back and forth trips, you need to be sure your move is well organized right from the start. When you work with an experienced and reliable moving company like North American, you can be sure we are handling everything needed to execute a seamless move. Relocating is stressful enough, so let the professionals at North American take care of your moving needs so you can focus on the excitement that awaits in Chicago.

Call us today to find out more information about our moving services.