Moving from Pennsylvania to California

Moving from Pennsylvania to California

California and Pennsylvania might reside in the same country, but each state is another world. When you move to California, you'll find warm weather, a bustling economy, and more entertainment than you can imagine. Moving can be stressful, but North American Van Lines does the hard work while you plan your new life on the West Coast. 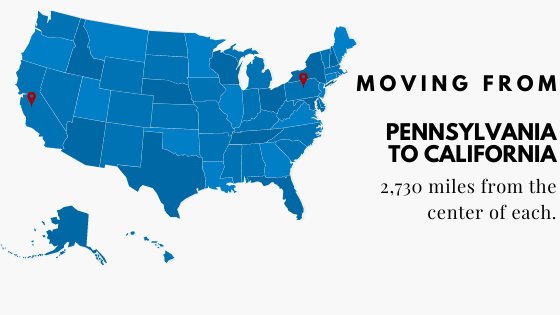 Benefits of Moving from Pennsylvania to California

Warm weather, incredible entertainment and a strong economy make California one of the busiest states in the U.S. Every year, thousands of immigrants choose California over every other state. Many see California as the land of opportunity, but do some research before you pack your bags--the culture is unlike anything else in North America.

California is famous for its warm weather. In the summer, California is hot and dry: perfect for trips to the beach or campsite. California has mild winters that rarely dip below 30 degrees Fahrenheit. No need to bundle up inside when winter arrives--you'll enjoy the outdoors all year long.

California has the largest economy in the United States and one of the biggest economies in the world--by itself, California ranks fifth in global economies, putting it ahead of countries like India, Italy and France. Hollywood, Silicon Valley and a massive agricultural industry bring in trillions of dollars each year.

Tourism boosts the local economies, especially in Los Angeles and San Francisco. Other industries like oil drilling and solar power contribute to California's success. The average income in California is about $60,000 per year, although some areas average $100,000 per year or more.

When you move to California, you'll never get bored. California offers some of the world's most famous landmarks, including the Golden Gate Bridge, Hollywood Sign, Death Valley, Joshua Tree National Park, and the Hollywood Walk of Fame. You'll be thrilled when friends and relatives visit so you can show them the places that you've only seen in movies.

In addition to famous destinations, California has thousands of stores, parks and restaurants that you only discover when you move to the state. You'll make memories and join a vibrant community of small business owners. Eventually, you might feel inspired to start your own business.

California has dozens of national parks with a diverse range of landscapes. Popular parks include Yosemite, Death Valley, Joshua Tree National Park, Tule Lake and the Santa Monica Mountains. Sequoia National Park is home to some of the world's largest trees, including the famous General Sherman, which is the largest tree on Earth.

Cost of Moving from Pennsylvania to California

On average, it costs about $4,457.37 to move from Pennsylvania to California. However, every situation is different. You'll have to factor in gas money, hotel stays, transportation costs, deliveries, meals and mileage on your vehicle. Other considerations include the number of items that you'll have to transport and special items that require different packaging.

The best way to determine the cost is to get a free quote from North America Van Lines. Fill out the form on our website, then provide your contact information so we can get back to you. We'll give you a cost estimate so you can plan your budget and decide if you're ready to move. 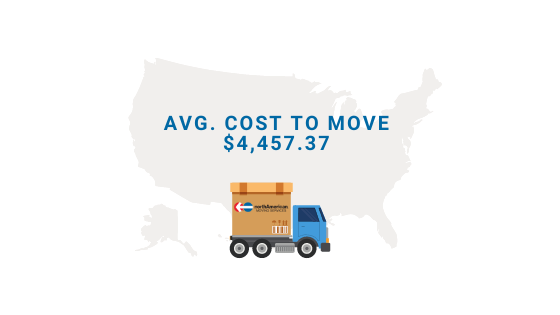 Most Popular Areas in California

California holds some of the United States' biggest tourist destinations. In fact, just visiting the state of California sounds impressive, especially if you live in a small town. People travel from across the world to see landmarks like the following:

Once you move to California, you'll find this is only a fraction of the theaters, restaurants, shows, stores, parks, attractions, and venues in the state.

How to Move from Pennsylvania to California

To move from Pennsylvania to California, start by getting a free quote from North American Van Lines. Our quotes are 100% commitment-free--we'll still help you if you decide to move at a later date. When you're ready, talk to us about starting the moving process. Our professional movers pack your belongings, load them into the truck and transport them cross country while you focus on the rest of the process.

Your friends might tell you to save money by skipping the professional movers. Unfortunately, friends and family members aren't always reliable. Unprofessional movers could get lost, damage your belongings or back out halfway, leaving you to complete the rest of the moving project. Plus, you might have to pay for their meals, hotel rooms, gas money, and other expenses separately.

When you hire North American Van Lines, you pay one fee that covers our expenses. We're responsible for your belongings, including furniture, jewelry, clothes, electronics, and family heirlooms. If an item gets damaged in transit, we'll compensate you for the hassle. Our movers have years of experience with transporting goods across the interstate. We'll get the job done quickly and efficiently so you can settle into your new life in California.

North American Van Lines uses the latest technology to protect your shipments and keep Moving Day on schedule. We're the first moving company to use WorldTrac, which connects us to our drivers through satellite. This provides live updates on each shipment. If you've got a question, we'll tell you where your belongings are at any given moment.

We vet our employees with stringent quality standards, then train them to drive safely with interactive simulators. Choose from 500 locations across the country so you won't have to travel far to reach us. Get your free quote today, then talk to us about starting the next chapter in your life.