Moving from NYC to San Diego

Moving from NYC to San Diego

Relocating to San Diego from New York City is one of the farthest moves geographically from one major city in the country to the other. Leaving the always busy Big Apple for the always-sunny beach town can be a big culture shock for many people, but the city of San Diego has a lot to recommend it, from beautiful weather to a diverse job market.

Today, we’re talking about moving from NYC to San Diego and the best way to make a long-distance move. 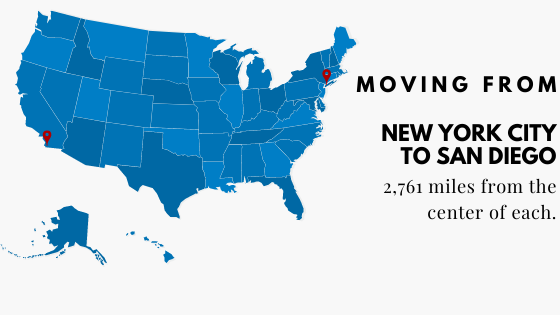 Benefits of Moving from NYC to San Diego

The difference between New York and San Diego isn't just East Coast vs West Coast. San Diego has a lot more than palm trees to offer newcomers. We’re breaking down some of the biggest benefits of moving from NYC to San Diego.

Housing costs are about the same in both cities, although depending on where in SD you live, you may be able to get a lot more house for your dollar, simply because space isn’t as much of a premium as it is in NYC. The median home price in San Diego is $645,300, compared to New York’s $680,500. If you’re renting something smaller, the average lease for a two-bedroom apartment in San Diego is $2,107, just a little bit higher than New York’s average of $2,049.

While the cost of living in San Diego is about 60% higher than the US overall, New York’s is higher, as well. You may be paying close to the same amount for your housing in San Diego, but other living expenses are much lower. Food and grocery costs are a bit lower here, but one of the most significant savings is utilities, which average 30% less in San Diego.

Not only will it be a bit cheaper to live in SD, but you’ll likely be bringing in more money, too. The median household income in the city is $71,535, compared to New York’s $57,782. However, California and New York have different state income tax brackets, so you may not keep all of that bigger San Diego paycheck. California has 10 brackets, from 1% to 13.3%, while New York's’ income tax rates range from 4-8.82%.

In 2019, the average job growth in San Diego was 1.4%, compared to 0.5% in NYC. Over the next 10 years, jobs are expected to grow 35% in San Diego, higher than the forecast for New York, 30.7%. San Diego has one of the most diverse economies in the country. Travel and tourism are huge, as are military and defense employment opportunities. Education, aerospace, biotechnology, and healthcare are all robust employment sectors, as well.

Downtown San Diego is a walkable area to work, play, and live, but the greater metro area is car-dependent. However, the average commute in San Diego is about 24 minutes; in New York, it’s 41.

Most people think of year-round warm and sunny weather when San Diego comes to mind, and New Yorkers tired of snow and cold will be quite happy living here. Those with chronic health conditions aggravated by colder weather may find relief in this warmer city. In fact, the Farmer's Almanac rates the climate in San Diego as one of the top ten in the country.

Although New York is also a coastal city, it’s definitely not known for its beaches. Spending time in the ocean is one of the most common pastimes in San Diego, from beachcombing to water sports, boating, and deep-sea fishing off the coast.

The warm San Diego weather also makes it easy to spend time outside year-round, enjoying one of the city's many attractions. From the San Diego Zoo to Sea World, Coronado Island, or simply spending a day shopping and dining in the walkable downtown area, there's plenty to do in SD.

How to Move from NYC to San Diego

Moving across the country takes a lot of planning and preparation, and the move from NYC to sunny San Diego is no exception. You’ll need to consider the time of year you’re planning to move, whether or not you’re driving. You don’t want to risk your moving van being snowed in during the cross-country haul! Luckily, the North American Van Lines team is experienced in moving through all kinds of weather and across all types of terrain.

Another thing to consider is timing your move to a job start date or when children are in and out of school. Don’t forget to give yourself a big enough time cushion to settle in, unpack, and explore your new home.

Cost of Moving from NYC to San Diego

Many factors go into moving costs, including household size. Obviously, a single person’s belongings will take up less space than those of an entire family. The number of belongings being transported, the distance, whether or not you require packing and unpacking services, and transportation of unique items, from pianos to boats, all go into the final moving estimate.

Keeping all this in mind, when you’re budgeting your move from New York City to San Diego, the best bet to know the actual cost is to fill out the Quote on Demand above. 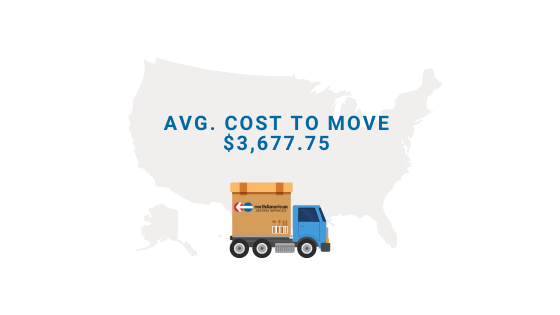 Most Popular Areas in San Diego

San Diego has beautiful neighborhoods, each with its own unique character. We’re looking at a few of the more popular places to live.

Just east of Downtown is North Park, a mix of residential neighborhoods and commercial areas. There's plenty of condos and apartments, as well as small California-style bungalows, perfect for young professionals.

Native New Yorkers may feel most at home in Little Italy, one of the most urban San Diego neighborhoods. There’s a sprinkling of local cafes and plenty of shopping destinations, as well as plenty of bars and clubs. With a popping nightlife, Little Italy is where locals and tourists alike go for late-night fun. The housing in this area is primarily apartments and condos, with a few single-family homes in the mix.

This is the quintessential California coastal city, with fast access to the beach and homes available at various price points. It’s laid back and perfect for a water enthusiast.

With easy access to all of the city's major highways and plenty of large, 4 and 5-bedroom homes, Mission Valley is a great family-friendly area, perfect for working families.

When you're ready to make your move from New York City to San Diego, there's only one choice for reliable cross-country moving – North American Van Lines. We offer competitive rates and certified, licensed, and bonded movers. We're rated one of the top movers in the country, with tens of thousands of moves under our belt. We offer flexible scheduling for each move so that your belongings arrive as soon as you do. Trust the best – North American Van Lines.