Moving from Maryland to North Carolina

Moving from Maryland to North Carolina

Choosing where to spend your life is an incredibly individual decision. People relocate for numerous reasons, including work-related issues and a chance to shift to their dream location, among other reasons. Whether you’re relocating from Maryland to North Carolina or any other part of the world, it’s still a big commitment.

Although relocating can be a thrilling experience for some people, the entire process can be daunting. The whole process can ultimately take a toll on you, from the high cost of shifting and storing furnishings to the expenses incurred with house hunting.

If you are an adventure enthusiast, relocating to North Carolina marks the commencement of an endless adventure. Also, if you prefer tranquility, there is no way you won’t enjoy peace in places like Washington, Pinehurst, Bald Head Island, Hillsborough, and Southern Pines, among other towns.

North Carolina is a state situated in the Southeastern parts of the United States. It is one of the largest states in the United States. It is a spectacularly dynamic state with massive diversity, culture, and charming people. Boasting fantastic weather, picturesque beaches, and dazzling scenery from the western border with Tennessee to the eastern coast of the Atlantic Ocean, North Carolina is packed with amenities you would anticipate from a major state. 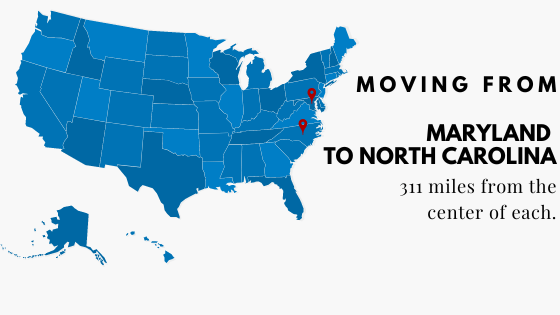 Benefits of Moving from Maryland to North Carolina

So, what comes into your mind when you hear North Carolina? Probably beaches, airplanes, weather, and shopping. Well, the state is a haven of charming mountain ranges, coastal gems, and superb educational institutions, among others. Below are some of the benefits of relocating from Maryland to North Carolina.

There is something truly magnificent about the mountain ranges that cross via North Carolina. Majestic mountains such as the Smoky Mountains, Blue Ridge Mountains, and the Appalachian Mountains provide striking heights. They have precise differences that are noticeable to North Carolinians.

Most mountains are situated on the Western side of the state. The diver’s topography provides a vast array of outdoor activities indiscriminately. While in North Carolina, you will have the opportunity to enjoy all four seasons.

There is are also many beautiful spots to visit. Enjoy the beautiful view at Asheville and visit the Biltmore Estate and the massive granite spire at Chimney Rock State Park.

Sports will become part of your daily conversations as you get more inclined toward this culture. Visit Durham and have an opportunity to see the widely recognized bulls. The league is the inspiration behind the Bull Durham movie.

North Carolina is also home to the legendary Wright Brothers, who introduced flight. The brothers tried flying at Kitty Hawk, situated on the coast of the Atlantic Ocean.

If you love discovering new and compelling things to do, North Carolina has limitless things to keep you entertained. If you love hiking, you can find plenty of hiking trails on the west side of the state.

The Appalachian Trail is one of the popular hiking trails in the state. You can spend a day swimming, surfing, boating, and fishing on the state’s east side. You are also just a few kilometers from the U.S. National Whitewater Center, where you can enjoy the thrills of river rafting.

The educational experience in North Carolina is very different from that in Maryland. North Carolina’s colleges have top-notch reputations, and the public school system is rated 25th in the United States.

However, the Maryland schools are ranked 13th. The 115 school districts found in North Carolina have more than 1.5 million students. Chapel Hill is undeniably the best district in the state. Schools like Wake County and Charlotte Mecklenburg have more than 300,000 students between them.

Although both states have challenges with traffic, the degree varies. Rush hours experience traffic congestion, especially in the major cities. However, there are no traffic jams in rural areas, even during rush hours.

The City of Charlotte has a light rail public transportation system. Major cities such as Raleigh and Durham have bus systems. Most people, however, do not use public means when commuting.

Cost of Moving from Maryland to North Carolina

Moving from one state to another can be nerve-wracking and costly. However, that doesn’t mean you can’t find an affordable solution. The average line haul moving cost from Maryland to North Carolina with North American is $3,000.

Everyone’s circumstances are unique, and many factors go into moving costs: the number of possessions you must transport, whether you are moving any special items, the total distance and whether you want help with packing and unpacking services. The best way to be sure of your cost to move is to fill out the Quote on Demand above.

Most Popular Cities in North Carolina

Charlotte is a major city and one of the most populated cities in North Carolina. It ranks 15th in terms of population density between Columbus, Ohio, and San Francisco. The city borders South Carolina. If you prefer warm weather and sunshine, Charlotte is the place to be.

Being the capital city of North Carolina, Raleigh is widely recognized for its picturesque scenery. There are mountains on the western side and the ocean to the east. The education sector in Raleigh is exceptional as the city is ranked as the third most educated city in the U.S.

Greensboro is one of the most populated cities in North Carolina. Conventionally, the city was known for its textile, filled with mills, factories, and blue-collar workers. However, the city has undergone a significant paradigm shift and is today recognized for its numerous athletic venues –courts, fields, stadiums, and pools.

How to Move from Maryland to North Carolina

Moving is physically exhausting, especially when you are crossing state lines. From the hassles of pulling boxes and furniture into a truck to the hassles of finding a new home and job is enough reason to make you feel like quitting.