Moving from New York to Texas

Moving from New York to Texas

If you are planning to move to Texas, you aren’t alone. Each day, more and more newcomers are flocking to Texas to take advantage of the state’s booming job market, warm weather, and affordable cost of living. In fact, five of the fastest growing cities in the country are located in the Lone Star State. It’s no secret that Texas is filled with some of the friendliest people in the country and the best food you will ever taste. With so much to offer, it’s no wonder so many people love calling Texas home. As you prepare to relocate from New York, here are just a few of the amenities you will find when you arrive in the great state of Texas. 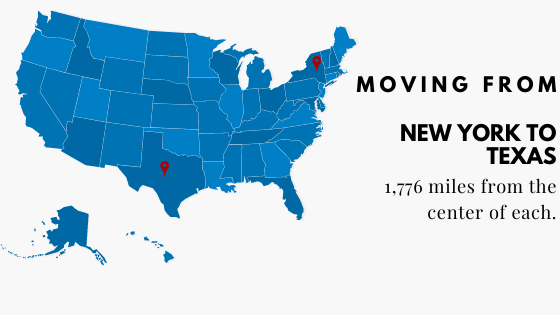 Benefits of Moving from New York to Texas

If you are ready to say goodbye to bone chilling cold temperatures and snowy winters, you are coming to the right place! Texas boasts a warm climate year round and despite its hot and humid summers, the other nine months are warm and mild. If you prefer a warm and coastal climate, there is an extensive coastline along the Gulf of Mexico where you can take advantage of the ocean breezes. The interior state has a hotter and more humid climate. As a whole, the majority of the state remains relatively warm and temperate throughout the year.

The biggest reason for Texas’ boost in population is its’ thriving economy and ample job opportunities. Four of the top 10 metropolitan areas for job growth are located in Texas, which is a huge draw for young professionals. The surge of jobs in recent years has helped the unemployment rate to stay below the national average. Though the unconventional oil and gas boom helped to put Texas’ economy at the forefront, the state now has a strong and diversified economy that has created job openings across a number of industries including agriculture, retail trade, business services, technology, education, and healthcare.

Not only do you have plenty of opportunities to get a good paying job, but the cost of living in Texas is lower than the national average and there is no personal income tax or corporate income tax. Texas residents get to afford the same standard of living for much less than it would cost in many other states. In fact, the overall cost of living in Dallas is nearly 84% cheaper than New York City while it is nearly 90% cheaper in Houston. Not only are land and real estate costs much more affordable in Texas than New York, but you will also save money on rent, groceries, utilities, and healthcare expenses.

It’s always a plus to move somewhere with good schools and strong educational opportunities and Texas will check that box. According to the National Center for Education Statistics, students in Texas have higher test scores than most other states. There are excellent public, private, and homeschooling opportunities across the state and over 90% of the schools in the state earned a ranking of B or higher. The state also boasts more than 200 colleges and universities including top-ranked universities such as Rice University, Texas Tech University, Texas A&M, and Southern Methodist University just to name a few.

If there’s one thing all Texans can agree on, it’s their love of food! The Lone Star State practically invented barbecue, and there is no shortage of restaurants ready to serve it up. While Texans are certainly proud of their barbecue, there are plenty of other signature dishes that you will soon become your favorites. With a large number of Mexican immigrants in Texas, it’s not surprising that the state has a strong love for foods like tacos, chile con queso, empanadas, and a slew of other Tex-mex cuisine. Each city has its own signature flavors and is home to plenty of incredible restaurants, food trucks, and local dives.

Houston is the most populous city in Texas and has everything to offer from a thriving job market to friendly people and vibrant communities. Houston ranks #1 in job creation, and lures residents looking for employment opportunities across a variety of industries. The low taxes and affordable cost of living also make the city alluring for young professionals and retirees. Houston has the largest medical center in the world, so you will have access to incredible hospitals, research institutions, and academic universities. Combine that with top-notch schools, fantastic sports teams, an excellent food scene, and loads of entertainment and it's easy to see why Houston is one of the fastest growing cities in America.

San Antonio is the second largest city in Texas and is also among the top five fastest growing cities in the country. Best known as the home of the Alamo, San Antonio is a city rich in history and culture. It offers picturesque neighborhoods and an affordable cost of living. The downtown is bustling with restaurants, shops, and the popular Riverwalk. There are plenty of jobs to be had in San Antonio, great schools, and plenty of outdoor activities which makes the city ideal for families. There are also thrilling attractions, amusement parks, and natural wonders just a short drive away.

With an abundance of job opportunities and a growing number of corporations choosing to make Dallas their home, it’s no wonder that it has ranked among the top places to live. Finding a job is easy, and you won’t have to worry about exorbitant cost of living expenses like you would in other major cities. Whether you want to live in the heart of downtown or in a quieter suburb, there are plenty of affordable housing options in the Dallas- Ft. Worth area. The city is home to world-class sports teams, outstanding healthcare facilities, plenty of wide open spaces, and excellent educational opportunities.

Cost of Moving from New York to Texas

A long distance move requires a lot of planning and can definitely put a strain on your budget. That’s why it’s important to work with a professional moving company like North American that is experienced, efficient, and affordable. The average linehaul moving cost from New York to Texas with North American is $3,600.

There are many factors that go into determining the exact cost of your move including the actual distance of the move, the number of items being moved, and additional moving services including packing and unpacking. The best way to get an accurate quote is by using our Quote on Demand tool listed above. 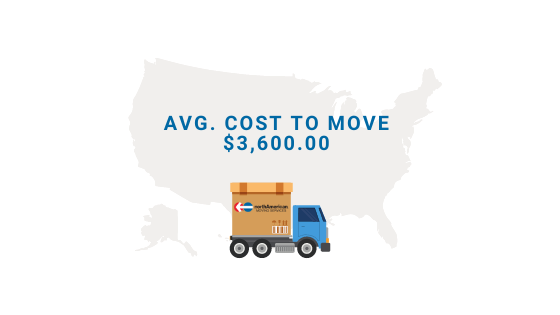 How to Move from New York to Texas

Long distance moves can present a number of logistical challenges and require careful planning and organization. Though you are probably excited about this exciting journey, you might also be feeling a bit overwhelmed at the thought of moving from one state to another. That’s why it’s important to work with a trusted company like North American to assist with all of your moving needs. With over 85 years of experience, we know just what it takes to execute a seamless long distance move. We offer a variety of moving services such as packing, loading, transport, and unpacking to help you every step of the way.

Call North American today to find out how we can help with your exciting move from New York to Texas!