Moving From California to Texas

As you prepare to relocate from California to Texas, you aren’t alone. More people move to Texas than any other state in the country and it’s easy to see why. Between it’s beautiful and diverse landscapes to ample job opportunities and an affordable cost of living, it’s no wonder so many people choose to make the Lone Star State their home. Though California has rolling hills and a lovely coastline, many people flock to Texas to escape the extremely high housing and rental prices in California. From delicious food and friendly people to affordable neighborhoods and exciting attractions, there are countless reasons why people are lining up to say “Howdy” to the great state of Texas.

Benefits of Moving from California to Texas

Texas has a booming economy and it ranks as the second largest in the country. It’s capital city of Austin also ranks among the top 10 fastest growing economies in the U.S. Oil and gas has turned Houston into a major energy capital but the state has also seen major growth in industries such as manufacturing, business, and technology. With major tech companies like Google and Apple making a presence in the state, Texas is quickly becoming a hotspot for young professionals looking to start or advance their careers.

Though California and Texas are two of the largest states in the county, the cost of living varies significantly between the two. California is one of the most expensive states to live and an individual would need an average of 30% more income to live in California than Texas. In fact, housing prices in California are nearly 60% higher than Texas. Aside from real estate, Texas residents will also find more affordable food, transportation, medical, and entertainment costs. In addition, Texas is one of the few states with no income tax, which equates to more money in your pocket.

While it’s tough to beat the near perfect weather in southern California, Texas residents enjoy a wide variety of comfortable climates. If you prefer warm, coastal climate, there is plenty of shoreline to enjoy along the Gulf of Mexico. If you prefer an area with more distinct seasons, the central part of the state is a great location. You can also enjoy year-round warmth and tropical climate in the southeast portion of the state. No matter where you live in Texas, however, you can expect relatively warm and moderate temperatures throughout the year.

Texas has a reputation for excellence in education across the state. In fact, students enrolled in public and private schools in Texas test higher on average than most other states. Texas is also a great location for higher education. With over 200 colleges and universities, Texas has ample opportunities to expand your education. Among the highest ranking colleges and universities include Rice University, Texas tech University, Texas A&M, and Southern Methodist University just to name a few.

Texans are known for being some of the friendliest people on the planet. This southern hospitality is just one of the most charming qualities of the Lone Star State. Texas is one of the few states where locals don’t want to leave because they are happy and satisfied with their way of living. They are quick to greet neighbors and give a “howdy” to smiling faces at the grocery store. You will certainly notice a culture of kindness and politeness everywhere you go.

Aside from a universal love for barbeque, just about all Texans have an affinity for sports. Texas is home to several winning national sports league franchises including the Dallas Cowboys, dubbed “America’s Team.” Other winning teams include the Houston Texans, San Antonio Spurs, Houston Rockets, Dallas Mavericks, Texas Rangers, Houston Astros, and the Dallas Stars. There are also plenty of college sports fanatics cheering on teams like the University of Texas Longhorns, the Texas A&M Aggies, and the Baylor Bears. Of course Texas is also home to the Houston Livestock Show and Rodeo, which is the largest rodeo in the world.

Houston attracts people who are looking for an affordable lifestyle and employment opportunities at some of the country’s largest companies. Houston is a major hub for oil, gas, manufacturing, and healthcare industries. Part of what makes Houston such a desirable city is the fact that it offers a booming economy along with affordable housing and incredible opportunities for entertainment. It is a well-rounded city with exciting amenities at a price more Americans can afford. Houston is also known for its excellent schools, diverse food scene, great sports, and plenty to see and experience.

San Antonio is a city like no other. It offers big-city amenities and exciting attractions coupled with a relaxed atmosphere that is comfortable and inviting. Most famous for the Alamo, San Antonio is a city rich in Spanish and Old West culture. Many residents are attracted to the city’s family-friendly community feel as well as the strong and stable job market. It’s a place where you can find rental and housing prices below the national average and a diverse real estate scene. It has a vibrant culture that is evident in the city’s cuisine, festivals, and parades. It also boasts the famous River Walk, a must-see destination for anyone looking to take an evening stroll along the San Antonio River. The River Walk is dotted with unique eateries and plenty of local shops.

With an abundance of job opportunities and a growing number of large corporations choosing to make their home in the Dallas-Fort Worth area, it’s no wonder so many people are flocking to this Metroplex. In addition to its growing economy, Dallas offers affordable housing and a low cost of living compared to other major cities. This is a huge draw for families looking to own their own home and live in a family-friendly neighborhood. Dallas is also home to a plethora of sports teams, excellent restaurants, outstanding healthcare, esteemed universities, and plenty of wide open spaces for outdoor recreation.

Cost of Moving from California to Texas

As you prepare to relocate from California to Texas, you are probably concerned about the cost of your move. Long-distance moves can be expensive, so it’s important to choose a moving company that offers excellent service at an affordable price. North American is proud to offer superior service and competitive pricing. The average linehaul moving cost from California to Texas with North American is $4,200.

The actual price will be dependent on other variables such as the number of items being moved, the exact distance of the move, and any additional moving services such as packing and unpacking. The best way to get an accurate quote is by using our Quote on Demand or calling our customer service representatives. 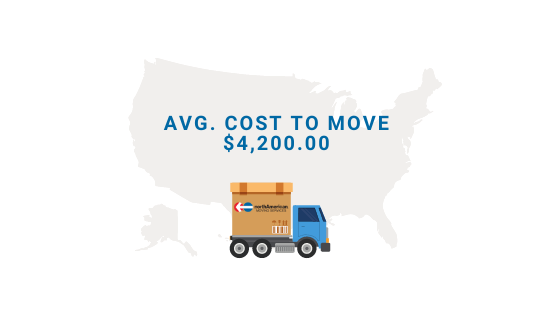 How to Move from California to Texas

Interstate moves require a great deal of planning and organization. It’s important to work with a trusted moving company who can make sure everything is well executed right from the start. North American offers a personalized approach so your long-distance move is smooth and easy. We offer a number of moving services from packing and unpacking to full-transport to ensure your belongings arrive safely and on time.