Moving from Florida to Texas

Moving from Florida to Texas

Moving from Florida to Texas may seem like the difference between day and night. However, the two states have a lot in common, and it won’t be long before you feel right at home in Texas. 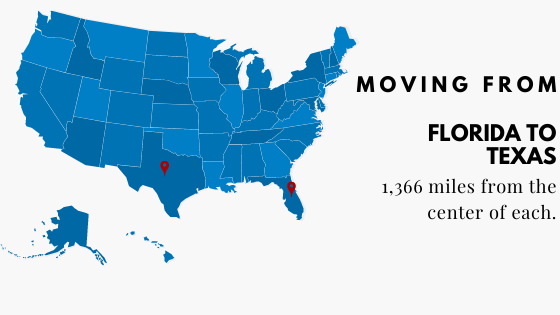 Benefits of Moving from Florida to Texas

As a Floridian, you’ll be happy to know that Texas is also a state tax-free zone. There are other financial advantages to relocating to the Lone Star State, and the benefits don’t stop there! Here’s a brief overview of what Texas has to offer.

Your hard-earned dollar will go further in Texas. Compared with the rest of the nation, the state scores lower than the national average in every category but utilities. The cost of housing is only 86% of the nation’s average versus Florida’s 99%. Plus, the average median household income in Texas is higher at $64,034, while Florida’s is $59,227.

Texas is a massive state, with a land area of 268,820 square miles. It’s the second-largest state, surpassed only by Alaska. All of this space means there’s a huge variety of climate, culture, population density, and opportunity. Over 29 million people live in the state, mostly concentrated in the major metropolitan areas, but you’ll find plenty of small farmsteads in between.

Texas boasts 102 state parks, which include Big Bend, Enchanted Rock, and Possum Kingdom. Big Bend is so large that it has its own airstrip, 238 miles of trails, and a scenic highway. Enchanted Rock is a giant granite dome near Austin in Fredericksburg, Texas, that draws rock climbers from all around. Possum Kingdom is west of Dallas-Fort Worth and is known for its bass fishing in the clear blue lake.

If you’re a history buff, you probably already know that Texas’s history is dotted with military conflicts, Presidential contributions, and national headlines. This rich history comes to life through the state’s many museums, historic districts, and battle reenactments. Of course, one of the most famous sites is the Alamo.

The fare in Texas is so unique it even has its own name - TexMex. A blend of Tejano and Texas flavors, TexMex is heavy on the cheese and flour tortillas. Coming in as a close second is some of the best barbeques in the south. Each region of the state has a distinct barbeque style, so you’ll need to explore the state to sample them all.

Texas is so immense that it’s impossible to detail all of its best features in one article. Each major city has its own flair and personality, from the Mexican heritage parades in San Antonio to the Fort Worth Stock Show and Rodeo. Vacation on the gulf coast or drive down Route 66 if you want a quick getaway.

Most Popular Cities in Texas

Texas is the second-largest state in the nation for both area and population. So it should come as no surprise that the state has an abundance of cities. Here are some of the most popular ones.

Once known as the Live Music Capital of the World, Austin has grown to be called “Silicon Hills” for its booming tech industry. The city is home to the SXSW music and arts festival, the University of Texas, and Austin City Limits. Its population is just under 1 million, averaging about 978,000. Since Austin is the state capital, you’ll find most of the state government buildings downtown.

Second only to Houston and San Antonio, Dallas is one of the state’s most populous cities. The city forms one-half of the Dallas-Fort Worth metroplex, home to more than seven million people. Interestingly, one-fourth of the city is made up of children and minors. Plus, the city is known as a major transportation hub with one of the world’s largest airports, four interstate highways, and multiple train lines.

In terms of population, you won’t find a city in Texas to beat Houston. In fact, it’s the fourth most populous city in the entire country, with over two million residents. Houston is home to NASA’s Mission Control Center and the world’s most impressive medical center. Oil and gas are the drivers of Houston’s economy. Don’t forget to visit Buffalo Bayou, the Houston Center for Contemporary Craft, and the Lone Star Flight Museum.

The resident population is small, at around 50,000, but it’s a vacation hotspot that sees millions of visitors annually. Located on the Gulf of Mexico coastline, Galveston is a major port for cruise ships. The city is steeped in history, as evidenced by The Strand neighborhood, the Texas Seaport Museum, and the Galveston Island Pleasure Pier. Some favorite attractions include Galveston Restaurant Week, Moody Gardens, Schlitterbahn water park, and the world’s tallest roller coaster.

Cost of Moving from Florida to Texas

The average line haul cost of a move from Florida to Texas with North American is $3,000. Your type and amount of belongings, the distance you’re moving, care of special items, and packing will all affect the cost of your personal move. To get a customized estimate that considers these factors, your best bet is to fill out our Quote on Demand or speak to one of our moving experts.

How to Move from Florida to Texas

Any move, big or small, comes with a certain amount of stress. There’s the stress of new jobs, schools, and neighbors in addition to the unfamiliarity of a new space. North American can help you minimize the stress of a long distance move. We’ll handle your belongings with care, navigate logistics, and see that your move goes as smoothly as possible. We offer affordable pricing, customized services, and 88 years of moving experience. Packing, loading, driving, storage, and even furniture assembly are as easy as dialing our phone number. Call our customer service representatives or use our Quote on Demand feature to get started!