Moving from Miami to Los Angeles

Moving from Miami to Los Angeles

Moving from Miami to Los Angeles may seem like exchanging one sunny, palm tree-filled locale for another, but these two cities are quite different. Besides the fact that they are over 2,700 miles apart, the character of each city is distinctly unique. Despite being the movie and TV mecca of the world, the City of Angels has a more laid-back vibe than the South Florida hotspot.

Today, we’re talking about moving from Miami to LA and the best way to make a cross-country move. 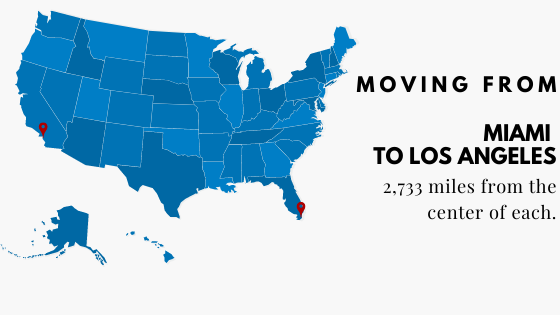 Benefits of Moving from Miami to Los Angeles

Analyzing the differences between Miami and LA isn’t just an east coast versus west coast comparison. There’s a lot more to Los Angeles than Hollywood, from a very diverse demographic to jobs in all kinds of employment sectors and several prestigious colleges in the area. We’re looking at some of the best reasons to move to LA from Miami.

Housing For Any Budget and Cost of Living Considerations

The greater Los Angeles area has an incredible array of housing opportunities, from beach homes to suburbs to hip downtown areas for young professionals. Although southern California real estate is known for being pricier than other areas of the country, the city itself has affordable housing in many different neighborhoods.

The average rental price for an apartment in Los Angeles is $2,371, which is a little higher than Miami’s average. However, food costs and utilities run about the same, on average, for both cities. The only consideration to factor into your monthly budget is potentially a higher cost of fuel. LA is a sprawling city, and your commute may be much longer than the one you had in Miami.

As the second-most populous city in the country, however, Los Angeles has a correspondingly high number of job opportunities. Plus, with Hollywood in the middle of the town, many people can pick up extra work in the entertainment industry as a movie extra or working in a studio’s food services department.

Although both Miami and Los Angeles are known for their sunshine and palm trees, the climatic similarities stop there. Miami is much more susceptible to hurricanes and tropical storms, and residents worry about needing to evacuate each year. Another concern with frequent tropical storms is worrying that one’s home or business will be flooded or destroyed.

Not that Los Angeles is exempt from natural disasters, but the chances of having your home damaged by weather or flooding are much greater in Miami. Aside from the storms, Miami’s heat is humid, not dry like LA, so it “feels” hotter. Both cities, however, have mild winters, which many people who don't like the cold will appreciate.

Just outside of Los Angeles proper are beautiful low mountains and hills. Runyon Canyon is one of the most popular spots for hiking and taking in the scenery, but there are several other places in the area perfect for outdoorsy residents to spend time. Miami, by contrast, is surrounded mostly by swamps, and hiking opportunities are few.

LA is a land of opportunity for people who want to be part of the entertainment industry, from music to TV, fashion, movies, and behind the cameras. It’s also one of the best culinary destinations in the country, with innovative, fresh cuisine and world-class restaurants. From exciting nightlife, beautiful outdoor spots to enjoying fresh air and sunshine or splashing in the water at one of the city’s 30 different beaches, there's always something new and fun to do in LA.

The beach is a hot draw for both Miami and Los Angeles and definitely a perk of living in either coastal city. However, Miami doesn’t offer any other variety for outdoor recreation. On the other hand, besides the beach, Los Angeles also has gentle hills and mountains for hiking, as well as forests just outside the main city center.

Children and adults alike enjoy visiting one of LA’s many theme parks, from Disneyland to Knotts Berry Farm, Legoland California, or Pacific Park on the Santa Monica Pier. Sports fans can take in professional and semi-pro games year-round, as Los Angeles has baseball teams, a football team, and two basketball teams, plus soccer and hockey.

For patrons of the arts, besides Hollywood and the movies and TV shows that are filmed in the city every day. There are also several performing arts centers for plays, musicals, and symphony performances. Plus, Los Angeles is known for some of the best museums in the country, such as the Los Angeles County Museum of Art, The Getty, and The Broad.

How to Move from Miami to Los Angeles

Cross-country moves can be tricky, and the move from Miami to Los Angeles is no exception. While the move doesn't involve crossing over a lot of mountains like some cross-country moves, there are still a lot of terrain considerations, especially if you plan on driving. There’s a lot of desert in between these two cities, so plan your pit stops accordingly. Fortunately, the North American Van Lines team is experienced in moving through all kinds of weather and across all types of terrain.

Timing your move often revolves around a start date for a new job or getting the kids back to school. Don’t underestimate how taxing a long-distance move can be for everyone involved, including pets. Be sure to give yourself a little bit of a cushion after you arrive to unpack and explore your new home.

Cost Of Moving from Miami to Los Angeles

There are a lot of factors that go into moving, but the main one is household size. A one-bedroom apartment is going to cost much less than a four-bedroom home. Plus, the costs can go up if you're moving specialty items, such as a piano or any fragile items.

Keeping all this in mind, when you’re budgeting your move from Miami to LA, the best bet to know the actual cost is to fill out the Quote on Demand above. 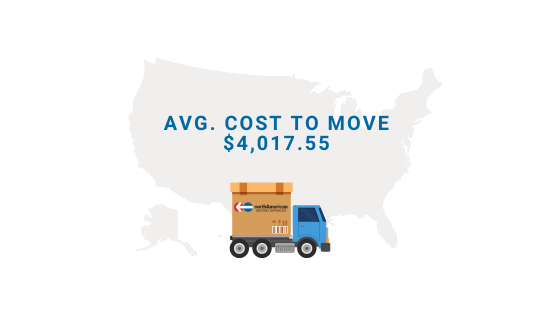 Most Popular Areas in Los Angeles

LA is known for its many beautiful, diverse neighborhoods. We’ve listed a few of the most popular.

This small, oceanside neighborhood is located off interstate 85 and is known for its plentiful outdoor activities, including beaches and places to hike. It’s very diverse and has a beautiful park and recreation system.

This smaller community in Santa Monica has fast access to the beach and a tight, urban feel. It’s great for young families, as it's in one of the city's safest areas.

Known for some of the best public school systems in the country and being home to the prestigious University of California - Irvine, this city is perfect for families and college students. It also has excellent public transportation.

This family-friendly community consistently ranks highest for low crime rates and safety. It's popular for families of all sizes with excellent public schools and many single-family homes to choose from.

When you're ready to move from Miami to Los Angeles, there's really only one professional moving company to use – North American Van Lines. Our competitive rates and services make us one of the top movers in the country. Plus, you can rest easy knowing that your household belongings are being transported by licensed, bonded, and fully insured movers. We offer flexible scheduling for each move so that your belongings arrive as soon as you do. Trust the best – North American Van Lines.