Philadelphia is one of the most beloved cities in the country and for good reason. It played a major role in American history and served as the location in which both the Declaration of Independence and the Constitution were drafted and signed. Therefore, it should come as no surprise that the city is packed with famous landmarks and historical sites. Aside from its rich history, Philadelphia also offers a robust economy, an excellent food scene, rich culture, and thrilling sports. For those preparing to move from New York City, we have put together just a few of the reasons why you will love living in the “city of brotherly love.” 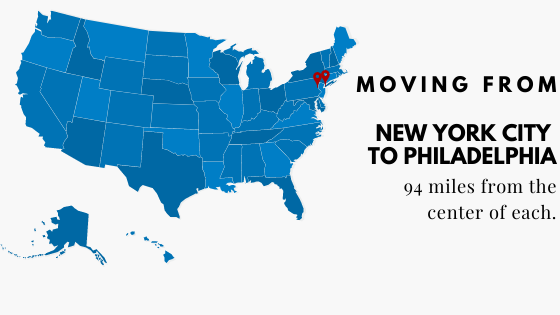 Benefits of Moving from New York City to Philadelphia

Philadelphia’s economy is not only recognized in the U.S., but all over the world. This provides residents with good career opportunities and better success for businesses. Among the most popular industries in the city are biotechnology, manufacturing, financial services, and oil refining. Furthermore, many large companies are headquartered in the city including ten of the country’s largest law firms and twelve Fortune 500 companies including Comcast, Crown Holdings, Wyeth, GlaxoSmithKline, Haas Chemical Manufacturers, Rohm, Boeing Rotorcraft Systems, and more. The federal government also has a large presence there, with the East Coast operations of the U.S. Mint and a division of the Federal Reserve Bank located nearby. The city is also known as one of the largest health education and research centers in the country.

Despite being the 5th most populous city in the U.S., housing prices in Philly still remain affordable. While your friends in NYC are paying an average of $5,100 for a 2-bedroom apartment, you will only be paying about $1,500 in Philadelphia for the same thing. Furthermore, the median home price in NYC is a staggering $2.2 million while it sits at $419,000 in Philadelphia. Overall, you will find that the cost of living in Philly is about 57% cheaper than NYC.

There’s no denying the beauty of Central Park, but they don’t call NYC a ‘concrete jungle’ for no reason. The city is packed with buildings and green space is not exactly abundant. In Philly, however, it is quite the opposite. When William Penn designed the city, he included loads of green space in his design with places like Rittenhouse and Washington Square Park. Philadelphia is also home to the 9,200 acre Fairmount Park, the largest city-owned park in the country.

Philadelphia’s location makes it easy to access some of the country’s most desirable cities. Just two hours from New York City and three hours from Washington D.C., a weekend getaway is easy. You can also experience the excitement of these two cities without paying the hefty price tag to live there. You are also just an hour from the beach and about 45 minutes from the mountains.

Philadelphia is one of the most historic cities in America and you can feel the American spirit all over the city. The founders of our country signed the most important documents at Independence Hall and the city is dotted with famous landmarks everywhere you turn. You can also visit the American Revolution Museum, the home of Betsy Ross, and of course, the famous Liberty Bell.

Cost of Moving from New York City to Philadelphia

Moving from one city to another doesn’t mean you have to forgo your budget. North American strives to provide customers with exceptional moving services at an affordable price. The average cost to move from New York City to Philadelphia with North American is $1,995.15. There are several factors, however, that will determine the exact cost such as the number of items being moved, special handling services, and additional services such as packing and unpacking. The best way to get an accurate quote is by using our Quote on Demand tool. You can also call and speak with one of our friendly representatives about getting a free quote. 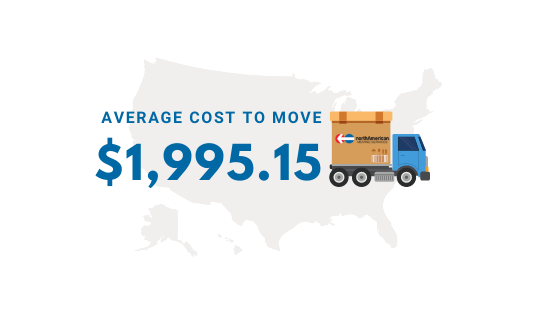 How to Move from New York City to Philadelphia

Moving from one city to another requires a great deal of planning and organization. Since you don’t have the luxury of making multiple trips back and forth, you need to make sure everything is well executed right from the start. That’s why it is recommended to enlist the help of a professional moving company when you are moving to a new city. North American has over 85 years of moving experience and our professional movers are equipped to handle every aspect of your move from start to finish. Relocating can be stressful, but with the right help, your transition can be smoother and less hectic. North American is here to take the stress out of your move so you can start enjoying your new home in Philadelphia.