Moving from Seattle to Dallas

Moving from Seattle to Dallas

Making a big move, especially across the country, can be a challenge. Not only do you have to move all of your belongings physically, but you also have to go through the hassle of changing your residence and taking care of the paperwork. 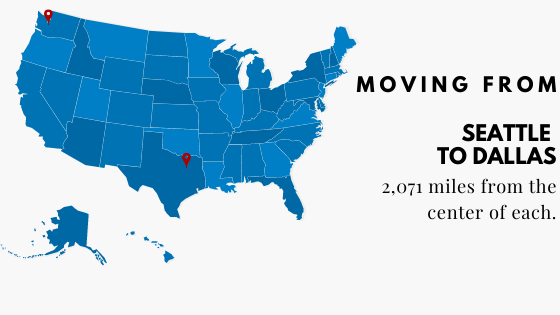 Benefits of Moving From Seattle to Dallas

The Weather is Much Nicer

As you can probably imagine, the weather in Dallas is much nicer than in Seattle. Seattle is known for rain and fog, even during the warmer times of the year. Meanwhile, you have probably spent each winter shoveling your driveway and warming your car engine. Dallas, on the other hand, enjoys moderate to hot temperatures all year round. Even in winter, the average low temperature is 39 degrees Fahrenheit, while the summer can climb in the 90s. Snow is a rare sight. Dallas is rainier than some places in Texas, averaging about 39 inches of rain a year.

The Cost of Living is Lower

There are some great things about living in Seattle, but it is not cheap. The cost of living in Dallas is lower than the national average, which means that owning a house could be in the forecast for you. Even though Dallas-Ft. Worth is a large metropolitan area, it is a surprisingly affordable place to live. In comparison, the cost of living in Seattle is more than 39 percent more expensive than in Dallas.

There Are More Job Opportunities

The job market in Dallas is booming. Twenty-one Fortune 500 companies are in the city, with many more companies migrating there. Dallas is ranked second in the country to start their careers as a place for recent graduates and young professionals. Even if you have been in the workforce for years, you can still find a place in Dallas-Ft. Worth. The city's unemployment rate is much lower than the national average, making it a great place to live and work.

There Are Great Schools

Families flock to Dallas for many reasons, not the least of which is the variety of schools in the city. The area is home to some of the country's best high schools, including the famous School for the Talented and the Gifted. This public charter school is a college preparatory academy and is rated the top public school in the entire United States. Primary education isn't the only place that Dallas excels; the city is also home to several respected universities, including Southern Methodist University, UT Dallas, and Dallas Baptist University.

The Culture is Fantastic

People from Texas are known for never ceasing to talk about their love for the place. But there is a good reason for that. The state as a whole has a vibrant culture that isn't easy to forget. Each major city has its unique vibe, and Dallas is no exception. The city is known for much more than just its football team. It is also known for its rich history, delicious food, and fascinating culture. There is quite a lot that you probably don't know about Dallas, including its thriving art scene and niche eateries.

Costs of Moving From Seattle to Dallas

Hiring Movers or Renting a Truck

Some people pay long-distance movers, which is a pricey but convenient option. The distance from Seattle to Dallas is 2,073 miles. Other people prefer to rent a truck or U-haul to bring their possessions to their new home.

The costs of these services will depend not just on the distance you travel but also on other criteria. These include:

In general, you can probably bank on spending a minimum of $2,000 for professional moving services across a long distance. Renting a truck is a cheaper option but not by much — you will probably spend at least $1,500 on one.

The average line haul cost of a move from Seattle to Dallas with North American is $3,000. To get an estimate, fill out the Quote on Demand tool above.

How to Move From Seattle to Dallas

Moving long distances is a long and challenging process. Here are the top tips for moving from Seattle to Dallas.

Planning ahead in this instance means several different things. First, make plans for your new life in Dallas before you hit the road. That might mean putting a deposit down on an apartment, having a job lined up, and getting some paperwork in place to switch your residency. Secondly, plan your moving services several months in advance. They will be significantly more expensive the longer you wait.

Downsize as Much as Possible

You're moving your whole life — you may as well take the opportunity to toss or donate what you don't need. One thing that can go in the donation bin is your winter wardrobe. Dallas stays warm throughout the year, so bring your snow boots and mittens to Goodwill.

Take the time to review your home and auto insurance before you hit the road. These may have policies involving moving, which can protect your possessions during the long trek from the Pacific Northwest to the Lone Star State.

There is a lot to plan when it comes to moving from Seattle to Dallas. But with these helpful tips, it doesn’t have to be an arduous process. Call our customer service representatives at North American to make your move to Dallas as easy as possible.