Moving from Minnesota to California

Moving from Minnesota to California

Have you always dreamed of living in a state with plenty of warmth and sunshine, stunning scenery, and easy access to the outdoors? If so, California is the perfect place for you. From the glitz and glamor of the Hollywood Hills to the cutting-edge technology of Silicon Valley, California is a state that is packed with vibrant culture and endless possibilities. Combine that with miles of beaches, the gorgeous Napa Vineyards, and even majestic mountains, and it’s no wonder the Golden State is considered one of the most desirable states to live in the country. As you prepare to relocate from Minnesota, here are just a few of the reasons why you will love making the Golden State your new home!

Benefits of Moving from Minnesota to California

While the rest of your friends back in Minnesota will be shoveling snow and bundling up during the winter, you will be enjoying the warmth and sunshine of the Golden State. California is known for its warm, sunny climate and that is one of the biggest draws to the state. Keep in mind, however, that the state has a varied geography. With mountains in northern California to the beaches of southern California, there will be some variation in climate. Nonetheless, the state sees an average of 260+ days of sunshine per year and temperatures between 70-80 degrees so it's hard to complain about that!

From the stunning coastal cliffs to the towering trees in Redwood National Park, there is no doubt that California is one of the most beautiful states in the country. California boasts more national parks than any other state in the country and offers a diverse landscape that is filled with natural beauty. Explore the incredible desert scenery in the Mojave, the granite cliffs of Yosemite, the rolling hills of Napa Valley, and the stunning beaches in SoCal. You can also take a drive down the Pacific Coast Highway, ranked among the most beautiful drives in the world! No matter where you are in the state, you are sure to be surrounded by incredible scenery.

Minnesota is certainly a great place to enjoy the outdoors during the summer, but California’s ideal climate makes it possible to enjoy endless outdoor activities all year round. With beaches, mountains, and forests, there are plenty of outdoor adventures to choose from, making California a fantastic destination for outdoor enthusiasts. For starters, living in California means easy access to water sports. Residents enjoy surfing, boating, fishing, jet skiing, or just relaxing along the sandy beaches. The state is also packed with national parks, providing opportunities for hiking, climbing, mountain biking, or just taking in the incredible views. In addition, you will find dozens of world-class ski resorts in the central portion of the state. California is one of the few places where you can literally go skiing in the morning and then hit the beach at night!

Bordering Mexico to the south and having an expansive coastline along the west, California has long attracted people from all over the world. You will find a wide range of cultures, languages, traditions, art, and cuisine, making California one of the most diverse states in the entire country. No matter where you live in the state, you will find unique neighborhoods, ethnic restaurants, cultural festivals, and people from all walks of life.

As the largest state in the country, it should come as no surprise that California has a booming economy. It is a great place to live for those seeking career opportunities, especially in the technology and film industries. San Francisco alone accounts for nearly 20% of all jobs, with tech giants like Facebook, Netflix, Google, Yahoo, Apple, and Tesla headquartered in Silicon Valley. If you are looking for employment in the film industry, you probably know that Los Angeles is the capital of the film industry. The Golden State is also home to some of the best film schools in the world.

There is no doubt that California definitely tops the list of foodie-favorite states. Los Angeles, San Francisco, and San Diego in particular are all known for their impressive food scenes. They all offer a wide variety of culturally inspired eateries, along with Michelin-starred restaurants and even local dives that are tough to beat. With a massive agricultural economy, you will also find plenty of fresh produce, farmer’s markets, and fresh seafood. Throw in California’s incredible world-renowned wine culture and you will find that the food and drink in California is almost impossible to beat.

Most Popular Cities to Live in California

Perhaps the most well-known city in the state and the epicenter of SoCal culture is the city of Los Angeles. This sprawling metropolis is the largest city in California and one of the most desirable places to live in the Golden State. Known for its upscale neighborhoods like Beverly Hills and Santa Monica, L.A. is an iconic beach city with a glamorous vibe. It is home to the world-famous Hollywood Hills and is considered the film capital of the world. You never know when you might run into a celebrity at a local coffee shop or restaurant! Thanks to its location between the coast and the mountains, L.A. also boasts some of the best climates in the country. With an average temperature of 75 degrees and almost 300 days of sunshine per year, it’s easy to see why so many people dream of living in L.A. It is one of the most diverse and unique cities in the country and gives residents a chance to explore the world without ever leaving the country!

Known for the Golden Gate Bridge and its iconic cable cars, San Francisco is also one of the most desirable places to live in California. The Bay Area is also regarded as one of the top cities to find a job thanks to its thriving technology industry. Silicon Valley, located just south of the Bay Area, is home to some of the biggest tech companies in the world including Apple, Google, Facebook, eBay, and so many more. Combine a hot job market with great weather, beautiful scenery, a world-class food scene and you will find that San Francisco really does live up to the hype. What’s more enticing is that San Francisco is just a short driving distance from incredible locations such as mountains, beaches, national parks, lakes, and rivers, so it’s easy to see why so many people love living in the Bay Area.

San Diego is perhaps the state’s ultimate beach destination. It is the second-largest city in the state, but despite its large size it still maintains a more small-town feel. Its location just north of the Mexican border also makes it one of the most culturally diverse cities in the state. The Mexican influence is reflected in the city’s incredible cuisine, and the close proximity to Tijuana makes for an easy weekend getaway! Life in San Diego is generally relaxed, with plenty of opportunities to get outdoors. The city boasts some of the best weather in the entire country, with average temperatures hovering around 75 degrees all year long! Here you will find near-perfect weather, stunning beaches, incredible food and craft beer scene, and some of the friendliest people in the state!

Cost of Moving from Minnesota to California

A long-distance move requires a lot of planning and can definitely take a toll on your budget. That’s why it’s important to work with a professional moving company like North American that is experienced, efficient, and affordable. The average cost to move from Minnesota to California with North American is $3,590.60. Of course, there are many factors that go into determining the exact cost of your move including the actual distance of the move, the number of items being moved, and additional moving services including packing and unpacking. The best way to get an accurate quote is by using our Quote on Demand tool listed above. 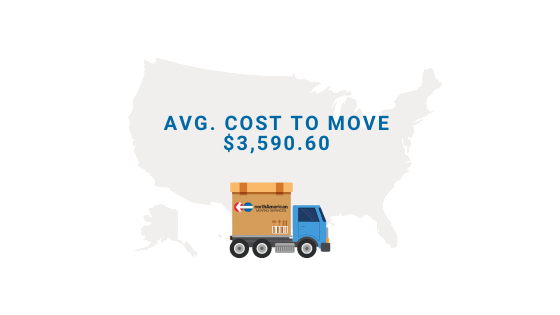 How to Move from Minnesota to California

Long-distance moves require a great deal of planning and organization and that’s why it is recommended to enlist the help of a professional moving company when you are moving from one state to another. With over 85 years of moving experience, our professional movers have the knowledge and experience needed to handle every aspect of your move from packing and loading to full transport and unpacking. Relocating can be stressful, but with the right help, your transition can be smoother and less hectic. North American is here to take the stress out of your move so you can start enjoying your new home in California!

Call North American today to find out how we can help with your relocation!