Moving from California to New York

Moving from California to New York

Believe it or not there’s more to New York than the bright lights and big dreams of New York City. New York is a beautiful state rich in history and bursting with natural wonder. As you prepare to move across the country from California to New York, you are in for quite an adventure. Though there are plenty of differences between the west coast and the east coast, New York is packed with big city amenities, quaint scenic towns, stunning beaches, and a culture all it’s own. Here are just a few of the amazing benefits of life in the Empire State.

Benefits of Moving from California to New York

Although the first thing that comes to mind when most people think of New York are skyscrapers, New York state is actually bursting with breathtaking views and natural beauty. From scenic water views to incredible rock formations, New York is home to some of the most beautiful places in the country. You can travel through spectacular landscapes filled with rich history in the Capital-Saratoga and Adirondacks regions. You can also take a drive through the Lakes to Locks Passage and take in views of the pristine Hudson River, Lake George, and Lake Champlain. Experience the beautiful mountain scenery, waterways, and farmland as you drive through the Catskills in upstate New York or take an up close tour of the incredible Niagara Falls. New York is packed with stunning waterfalls, majestic mountain views, breathtaking lakes and rivers, and loads of state parks.

While California boasts year-round warmth, residents aren’t treated to the beautiful change of seasons like New Yorkers experience. New York is one of the best states to take in the beauty of all four seasons. The summers are nice and warm and the winters abound with snow and cold temperatures. In between, you get to experience the incredible fall foliage and the gorgeous buds and flowers in spring.

You Have New York City

You’ve seen it in countless movies and tv shows and now you get to experience the excitement of the Big Apple in person! New York City is one of the most iconic locations in the world and it's a place many can only dream about living. It’s an incredible place to live or just visit for a weekend getaway. NYC is home to some of the most famous locations and landmarks in the country including the Statue of Liberty, the Empire State Building, Central Park, the 9/11 Memorial Museum, and so much more! Whether you come to check out a concert or sporting event or you prefer dining, shopping, and nightlife, NYC is a city like no other.

New York is a state famed for its higher education and is home to more than 200 colleges and universities. Among them are some of the top ranked institutions in the country including Columbia University, Cornell University, Barnard College, West Point Military Academy, New York University, Hamilton College, Syracuse University, and many more.

New York might be home to the largest city in the country, but it is also filled with plenty of small towns as well. If you love the idea of strolling down a charming small town Main Street filled with antique stores and local restaurants, you will definitely find that in New York. Among the most charming towns are Aurora, Cold Spring, Cooperstown, and Lake Placid. From shopping and dining to skiing and hiking, these small towns are exactly what you need for a weekend getaway.

Most Popular Cities to Live in New York

Many consider the Big Apple to be the greatest city in the world. If you are someone who doesn’t mind the fast paced hectic lifestyle, you might find that NYC is the place for you. New York City is made up of five boroughs, each with their own unique charm, culture, and personality. NYC is also packed with people from all over the world and is one of the most diverse cities in the world. It’s a fascinating city rich in culture and history. New York is also the land of opportunity for many. From finance to business, fashion to entertainment, New York City is a place where dreams come true. It’s packed with famous landmarks and attractions as well as more restaurants than you could ever imagine. Known for its vibrant nightlife and bright city lights, NYC truly is the city that never sleeps!

If you are looking for a city that gets its fair share of snow and is serious about their sports, Buffalo might be the perfect fit. Known as the City of Good Neighbors, Buffalo residents share a strong sense of community and are ready to look out for one another. If you are in need of a snow shovel (and chances are you will be!) you can count on your neighbors. Buffalo is also home to a vibrant nightlife scene, a rapidly expanding food scene, plenty of local sweets shops, and serious sports fanatics, including Bills Mafia. Between sporting events, festivals, concerts, and local parks, there is always something to do in Buffalo!

Cost of Moving from California to New York

It can be costly to plan a coast to coast move, but North American offers a range of affordable services to help you save money and stay on budget. The average cost of a cross-country move from California to New York is dependent upon many variables but averages around $4,149.74 with North American. Many factors play a part in determining the cost such as exact distance of the move, the number of rooms being moved, and additional services such as packing and unpacking. Get a more accurate quote by using our Quote on Demand tool or call and speak with one of our friendly customer service representatives. 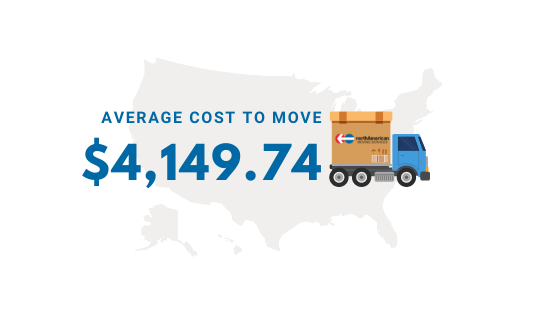 How to Move from California to New York

Although it can be exciting to embark on a cross-country move, it can also be challenging and stressful. Long distance moves present a number of challenges, but North American is available to help make your move as efficient, affordable, and stress-free as possible. Cross-country moves require a little extra help and planning and that’s why it’s important to work with a professional moving company like North American. Our experienced movers are fully equipped to handle long distance moves and can help with everything from packing and unpacking to shipping and transport. We will work to customize a moving package that is just right for you and we will take the stress out of moving so you can focus on your exciting journey from California to New York!

Call us today and find out more about how we can help you with your long-distance move!