8 Reasons to Move to Málaga, Spain

Few cities are more enjoyable, beautiful, or liveable than Málaga, Spain. Founded by Phoenician traders more than 2,700 years ago, Málaga is not only one of the oldest cities in the world, but a major center of European culture.

Although the city can trace its roots back to African, Roman, Islamic, and Medieval civilization, Málaga is thoroughly modern in design. Massive urban renewal has transformed the city into one of the most comfortable places on the continent. People are drawn here from all over Europe and America, both for its prosperity and low cost of living. So whether you’re looking for a new home or a new start, here are eight reasons to move to Málaga, Spain. 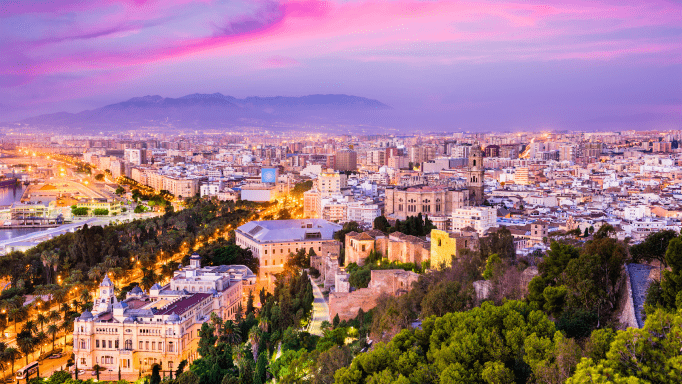 Málaga enjoys over 300 days of sunshine a year. What’s more, temperatures here are as close to perfect as you could hope for. The Montes de Málaga (Málaga Mountains) protect the city from excessive rain and heat. No matter what it’s like in the rest of Spain, in Málaga it's always pleasant. Temperatures rarely climb above 90°F or dip below 60°F.

In a country known for its beaches, Málaga has some of the best. Famous for its dark sands, warm waters, and moderate swells, Málaga beaches are accessible to residents of all ages and abilities. With almost 100 miles of coastline, the area is a swimmer’s paradise.

You don’t even have to travel far to enjoy the coast. Most of the city’s major beaches are a short walk from the city center. And practically every beach has earned a blue flag from the Foundation for Environmental Education, certifying that they’re safe, clean, and sustainable.

Few people drive in Málaga. It’s one of those rare places where cars are more of a burden than a benefit. The city is highly compact; most major attractions are only a short walk from one another. But if you need to get around faster, there are 18 miles of bike lanes as well as an efficient bus service connecting the city’s neighborhoods, suburbs, and villages.

Málaga is also home to Spain’s third largest airport and a major rail network. Hop on a train and within a few hours you can visit Granada, Gibraltar, Nerja, and Mijas Pueblo, some of the biggest and most charming attractions in Southern Spain.

Like any Spanish city, Málaga loves wine and tapas. But eating here isn’t like eating anywhere else. Málaga prefers to put its own spin on Spanish cuisine. Local favorites include:

Málaga is more than a city of chefs, swimmers, and sunbathers. It’s also a city of history, art, and culture. During Holy Week, it's alive with light, color, incense, flowers, and song. Huge processions wind their way through the streets, carrying ornate displays commemorating the city’s faith and spiritual traditions.

In summer, the Fiesta de Agosto marks the city’s liberation with a week of drinking, dancing, and bullfights. Women don bright, flouncy flamenco dresses and dance wildly in the town square. Traditional Andalusian dancing involves lots of finger-clicking and foot-stomping. The mood is so infectious, everyone gets pulled in.

Matadors fight in the arena every day and booths are erected along the major boulevards, selling food, drink, and souvenirs until the end of the week, when a massive fireworks show brings the celebration to a close.

In between festivities, residents enrich themselves at the city’s museums ‒ 37 institutions celebrating Europe’s artistic traditions and modern innovations. Imagine spending an afternoon exploring the:

Villas, townhouses, and apartments in Málaga aren’t only beautiful, they’re affordable. The average home price in Málaga is $320,000, compared to $428,000 in the United States. Rent is cheaper as well, more than $400 less than what you would pay in the USA.

Málaga is a vibrant, passionate city at any time of day. Stroll through the Muelle Uno (Dock One), just a stone’s throw from the ocean, and you’ll find street musicians, art exhibits, live theater, craft markets, and outdoor films. Along Larios Street, near the heart of the city, are boutique shops, cozy pubs, high-end dining, and some of the city’s most elegant architecture, dating back to the 19th century.

But the real party starts at night. After the sun goes down, the city’s tapas bars light up. No one in Spain goes out on an empty stomach. Around midnight, after a late dinner, they head out on the town. The Centro Histórico (Historic Center) is the most popular destination. Clubs here are packed almost every night with a wild assortment of people from all over the world.

Or pay a visit to Calle Carreteria or Calle Alamo, where bars, restaurants and nightclubs stay open late. For something off the beaten track, stop by El Microteatro, which features short, 15-minute plays along with some of the city’s most finely crafted cocktails.

Málaga is situated in rugged, rolling landscape dotted with Medieval castles and ancient ruins. Hikers can scale the Fuente del Esparto or Cerro Lucero, two stunning peaks with incredible views of the Mediterranean and the white, gray Spanish mountains surrounding the city.

Down below is a maze of rivers, lakes, and canyons to trek through. Natural slides and waterfalls make it a beautiful and exciting adventure. For real thrills, check out the Camanito del Rey. The trail is carved into mountain rock 300 feet above the Guadalhorce River. If you’re lucky, you’ll encounter a few mountain goats or catch a glimpse of golden eagles circling overhead.

Hikers who prefer to stick closer to home can explore La Alcazaba or Castillo de Gibralfaro, the hilltop fortresses looming over the city. Walk along ancient battlements and massive towers where knights and Moors clashed hundreds of years ago. Further down the hill are ruins of an old Roman theater, incredibly well preserved. Sit where thousands used to laugh and cry at the drama onstage, then tour the displays in back with the artifacts unearthed there.

Out at sea, residents can take a kayak to the secluded caves and beaches along the Cliffs of Maro Cerro Gorda. Or sail through the crystal clear waters offshore. And if you like, grab a speedboat and go parasailing. On land or at sea, there’s never a dull moment here.

How to Move to Málaga, Spain

Overseas moves are easy with the right team smoothing the way for you. North American Van Lines maintains an extensive network of employees and partners who operate across the globe. Whether you want to move to Malaga, Spain or anywhere else, we work with you every step of the way, from packing to passports, ensuring no detail (big or small) is overlooked or mishandled. Reach out for a free, personalized quote today!