Moving from New York to Arizona

Moving from New York to Arizona

A cross-country, long-distance move from New York to Arizona is a major decision. Unlike New York, Arizona provides a unique landscape with four deserts and 3,928 mountain peaks. Arizona is home to a wide selection of wildlife, some exciting and some not. 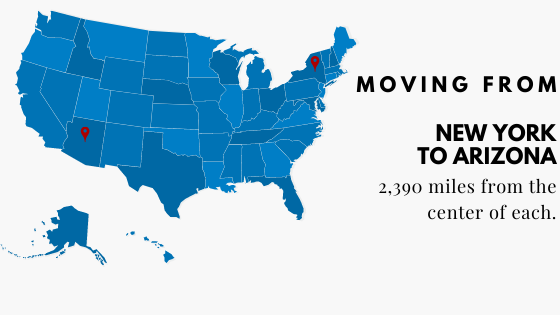 Benefits of Moving from New York to Arizona

Here are reasons why your New York to Arizona move is worth it:

Home to over seven million residents, Arizona is the 6th largest state in the US regarding population. Did you know that Arizona is 2.4 times bigger than New York in size?

However, New York is more highly populated than Arizona. With this fact, it is evident that you will stretch out comfortably when moving to Arizona.

There is almost no mentioning Arizona without mentioning the famous Grand Canyon. It is one of the most popular of Arizona's tourist attractions, attracting millions of visitors from all around the world annually.

With over 1,904 square miles, 1 mile deep, 18 miles wide, and 277 miles long, the Grand Canyon is surprisingly bigger than Rhode Island. As a new Arizonian, you can visit this great wonder and choose your adventure, from rim to rim hiking trips, whitewater rafting, and donkey rides.

Almost like New York, Arizona's population is highly diverse. Arizona is home to the 3rd highest Native Americans number, with a rough estimation of 317,000 as of 2019. This is over 10% of the country's entire native population. Additionally, an estimated 28% of Arizona residents speak languages other than English, including Cantonese, Mandarin, Navajo, and Spanish. Arizona hosts different people from all around the world.

Additionally, though higher than the US average, housing costs in Arizona fall significantly lower than in New York. As such, you can get a better house deal than what you ordinarily spend in New York. Moreover, Arizona is considered one of the most tax-friendly states in the US.

In search of employment opportunities? Arizona has got you covered. While New York is a central hub with many industries and job opportunities, the competition for these jobs is very high, especially considering the population.

Different types of artists flock to Arizona to marvel at the stunning natural inspiration. Guests also come to the state to taste the growing arts community, celebrated through unique festivals from time to time.

The City of Tempe hosts the Summer Ends Music Festival to celebrate the end of the hot season. Head over to Tucson, which hosts the La Fiesta de Los Vaqueros, a western-themed week-long celebration that features parades, barrel racing, roping, and bull riding.

You can also try living in Phoenix, where they host the Festival of Arts that welcomes plenty of art vendors and cultural offerings. You have the option of popping into the Phoenix Art Museum, the Arizona Science Center, and the Scottsdale Museum of Contemporary Art.

Arizona is a major part of the Cactus League for baseball spring training. It is also home to the Diamondbacks. You can pop in at training facilities to watch major baseball teams prepare.

Arizona's transportation system is relatively reliable and extensive. Arizona boasts more than one international air gateway and plenty of regional airports. It also has several major state and national highways running through the state.

Moving around and between cities in Arizona is convenient and affordable, especially with car rental. In addition, Greyhound operates inter-city buses, which stop in major Arizona metropolises, including Glendale, Yuma, Tucson, and Phoenix.

Other affordable bus networks serving Arizona include Phoenix's Valley Metro and the Mountain Line of Flagstaff. Besides bus services, Valley Metro also operates a light rail system in Phoenix. The roads are well maintained, making it easy to commute by personal means.

According to Safewise, property and violent crimes are significantly dropping year by year. Compared to New York, Arizona has a relatively lower crime rate and is the safer option to live in.

How to Move from New York to Arizona

New York to Arizona is not an easy move. This is typical of all cross-country long-distance moves. Moving across state borders may involve tedious bureaucracy. If you want a smooth, hassle-free, and reliable long-distance move, hire the services of a reliable mover.

Allied Van Lines is a reliable moving company providing local and international moving services. We will help you come up with a moving plan that ensures a smooth transition from New York. Contact us to help you pack, move, and settle as soon as possible in your new Arizona home or office.

Cost of Moving from New York to Arizona

The average cost of a move from New York to Arizona is $4,362.40. However, when it comes to moving, your costs may be higher or lower depending on several factors, including:

Most Popular Areas in Arizona

If you love nature, then Arizona is the place to live. With its majestic canyons, stunning deserts, and rugged mountains, Arizona is also home to several neighborhoods that are ideal for living in. These include:

Chandler is half family-friendly and half cosmopolitan. As a resident of this city, you have access to a vibrant downtown area and award-winning school districts. Despite being one of the most populated cities in Arizona, housing is affordable in Chandler.

The city is a mixture of the Wild West vibes and a modern, upscale feel. Scottsdale's crime rate is low, and education is top-class. More importantly, the city is perfect for families.

Tempe is experiencing a growth spurt and is becoming increasingly popular among college students. The city attracts young professionals and families. It also has several versatile housing options.

Other places to live in Arizona include Strawberry, Paradise Valley, and Phoenix.

We provide comprehensive moving services regardless of the move size and the move distance. Whether you are moving within or across state borders, you can rely on NorthAmerican Van Lines to Move your safely. Reach out to us today to help you develop and implement a comprehensive moving plan for your upcoming move from New York to Arizona.