Moving from New York to Philadelphia

Moving from New York to Philadelphia

Philadelphia is a bustling metropolis steeped in history and packed with incredible amenities. As the 6th largest city in the country, Philadelphia has everything you want in a big city: great restaurants, a vibrant arts and culture scene, thrilling sports, and loads of entertainment. Combine that with a booming job market and top-rated universities and it’s no wonder Philly is quickly becoming one of the most popular places to live in the U.S.

As a transplant from New York, you aren’t alone. Philadelphia has become a top destination for people who want to live on the East Coast. Luckily, Philadelphia embraces newcomers and provides a tight-knit community feel so it is a perfect place to move. As you prepare to relocate from New York, here are just a few reasons why you will love settling down in the City of Brotherly Love. 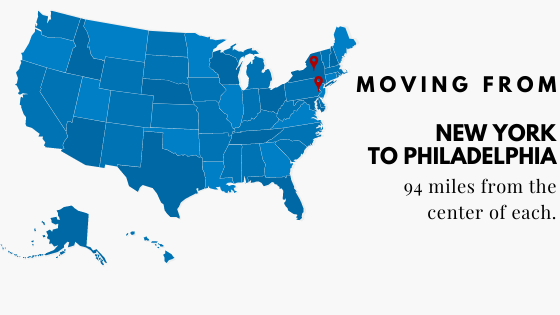 Benefits of Moving from New York to Philadelphia

Perhaps one of the most interesting characteristics of Philly is that despite its large size, it still maintains a small town feel. Residents get to enjoy the amenities you would expect from a big city such as a world-class dining scene, arts and culture, and great public transportation. However, unlike other large cities, Philadelphia is packed with tight-knit communities and welcoming neighborhoods. Furthermore, the original cobblestone streets that line much of downtown give it a quaint charm that you just don’t find in other major cities.

As the birthplace of our nation, it should come as no surprise that Philadelphia is packed with historical sites including the Liberty Bell, Independence Hall, the Betsy Ross House, Benjamin Franklin Museum and so much more. Everywhere you turn, history is surrounding you, from the historic rows of houses to the cobblestone streets and beautiful courtyards.

When you live in a large city, it is important to have an efficient public transportation system. This is perhaps one of the biggest perks of living in Philly. The city’s public transportation system includes more than 70 bus routes, a subway, and a rail system so you can easily get around the city without owning a car. There are also plenty of small, walkable neighborhoods and plenty of dedicated bike lanes so it is a great city for both bikers and pedestrians.

As much as a city skyline is a sight to behold, it’s also wonderful to have easy access to green space. For a city of its size, Philadelphia has a remarkable amount of green space. In fact, Philadelphia has one of the best-rated park systems in the entire world! Fairmount Park is the largest urban park in the country, spanning 4,200 acres and offers walking trails, rolling hills, waterfront esplanade, and forested areas for everyone to enjoy. The city also has trails and greenways that link up various neighborhoods and creates a more walkable city.

Philadelphia is a fantastic destination for foodies and is home to some of the best award-winning restaurants in the country. The food is so good in fact, that people actually drive in from New York just to eat! While it may be best known for its delicious cheesesteaks, there are loads of popular dining spots offering a plethora of incredible eats.

Cost of Moving from New York to Philadelphia

Interstate moves can be both stressful and expensive, so it’s important to choose a professional moving company that you trust to do the job right. North American has been in the moving industry for more than 85 years and we strive to provide customers with exceptional service at a price they can afford. Although moving to a new city can be costly, the average cost to move from New York to Philadelphia with North American is $1,988.89. Of course there are many factors that will determine the exact cost such as actual distance of the move, the number of items being moved, and additional services such as packing and unpacking. The best way to get an accurate quote is by using our Quote on Demand tool listed above. 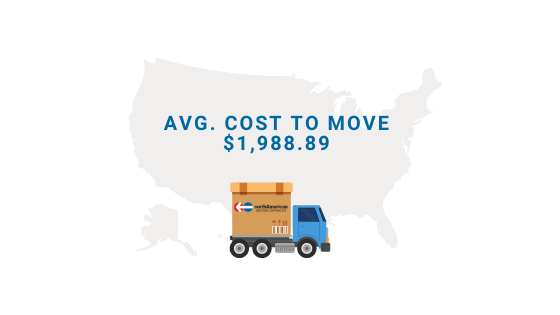 How to Move from New York to Philadelphia

Moving to a new city requires a great deal of planning and organization to ensure everything is well-executed right from the start. That’s why it is recommended to enlist the help of a professional moving company when you are moving from one state to another. North American has over 85 years of moving experience and our professional movers are equipped to handle every aspect of your move from packing and loading to full transport and unpacking. Relocating can be stressful, but with the right help, your transition can be smoother and less hectic. North American is here to take the stress out of your move so you can start enjoying your new home in the exciting city of Philadelphia.