Moving from Houston to Dallas

Moving from Houston to Dallas

A booming economy, incredible food, and thrilling sports are just a few of the exciting things Dallas has to offer. Located in the heart of north Texas, Dallas is a thriving metropolis with access to everything from world-class dining to fabulous entertainment. With an abundance of job opportunities and a growing number of corporations choosing to make the Dallas Fort-Worth area their home, Dallas has been ranked among the best places to live in the country. Featuring a warm climate, a low cost of living, and so much more, it’s no wonder so many people move to Dallas. As you prepare to relocate from Houston, here are just a few of the top reasons why you will love settling down in Dallas. 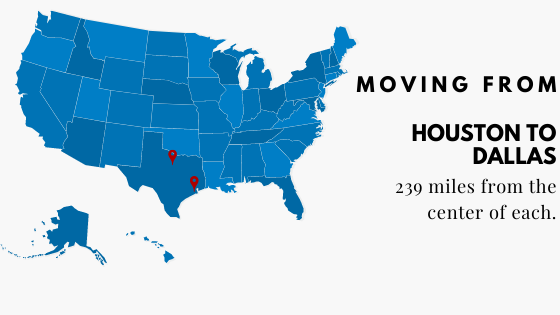 Benefits of Moving from Houston to Dallas

As one of the largest metropolitan areas in the country, the Dallas Fort-Worth area is also home to a number of job opportunities. Some of the largest companies in the world are headquartered in the city including Southwest Airlines, AT&T, ExxonMobil, Toyota, Liberty Mutual, and JCPenney just to name a few. The city appeals to large corporations thanks to its convenient location next to an international airport, an abundance of open land, and a growing workforce. This has created a number of employment opportunities and will continue to do so as the city and the economy continues to grow.

Whether you seek a modern townhome in the heart of downtown or a single-family home in the suburbs, Dallas is filled with both modern and traditional neighborhoods that are reasonably priced. While real estate prices have been on the rise due to the city’s growing popularity, it still remains among the most affordable urban housing markets in the country and falls below the national average for cost of living expenses.

If there’s one thing Texas residents can all agree on, it’s their love of sports. The sports culture in Dallas runs deep and residents love their hometown football teams. The city is home to the beloved Dallas Cowboys, dubbed “America’s Team.” The entire city comes together to rally around their team and football season in Dallas is unlike any other in the country. In addition to the Cowboys, Dallas residents also love to cheer on their other professional teams including the Dallas Mavericks in basketball, the Texas Rangers in baseball, and the Dallas Stars in hockey. The frenzy and fandom of sports even carries over to the city’s local high schools and colleges.

Food is a big deal across the state of Texas, and Dallas is no exception. No matter what neighborhood you visit, there is always something delicious in store. You can find plenty of Texas staples like barbeque and Tex-Mex, but there are also a number of ethnic dishes being served across the city. From fine-dining eateries to class comfort food hotspots, Dallas has plenty of delicious options for food lovers.

If you are moving with children you will be happy to know that Dallas is home to a number of excellent elementary, middle, and high schools. With nearly 40 school districts, Dallas has plenty of schools to choose from and many are known for their academic excellence. In fact, Texas is known for having some of the best schools in the country. The Dallas Fort-Worth area is also home to a number of colleges and universities including the esteemed Southern Methodist University, Texas Christian University, and Texas A&M among many others.

Thanks to its economic opportunities and affordable cost of living, Dallas appeals to many young families. Luckily, the city has plenty to offer for families with children. Spend a day exploring dinosaurs at the Perot Museum of Nature and Science or venture on the wild side at the Dallas Zoo. You can spend a beautiful day outdoors exploring the Dallas Arboretum and Botanical Gardens or get your thrill on as you ride roller coasters at Six Flags Over Texas. With so many exciting attractions, there are endless possibilities for family fun.

Cost of Moving from Houston to Dallas

It’s understandable that many people want to stick to a moving budget when they are relocating from one city to another. That’s why North American strives to provide customers with exceptional service at an affordable price. Though moving costs will vary slightly, the average cost to move from Houston to Dallas with North American is $2,137.04. Of course, there are many factors that go into determining the exact cost of a move such as distance, amount of items being moved, and additional services such as packing, unpacking, and providing packing supplies. The best way to get an accurate quote for your move is to use our Quote on Demand tool listed above. 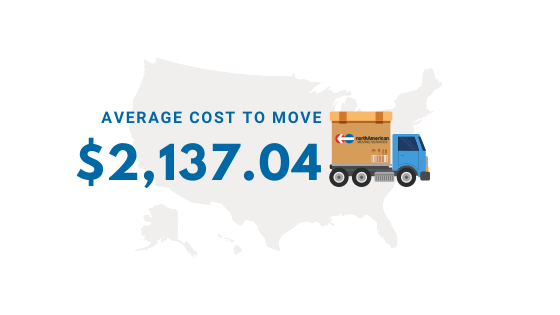 How to Move from Houston to Dallas

Moving from one city to another requires a great deal of organization. It can be difficult to handle all of the logistics of moving in addition to all of the other tasks that go along with an interstate move. North American has been moving customers for more than 85 years and understands exactly what it takes to handle long distance moves. From professional packing to worry-free transport, North American has you covered every step of the way. Relocating to a new city can be stressful and overwhelming and that’s why North American works hard so you can kick back, relax, and just focus on enjoying your new life Dallas!

Call today to find out how North American can customize a moving plan just for you or start by filling out our Quote on Demand tool above.