Moving from Austin to Dallas

Moving from Austin to Dallas

The secret is out. Dallas is an amazing city and everyone is moving there! Dallas has been a popular choice for newcomers for several years now. With a booming economy, awesome food, thrilling sports, and an affordable cost of living, it’s no wonder Dallas has become one of the fastest-growing cities in America. This sprawling city has an incredible downtown scene as well as plenty of family-friendly suburbs, making it an ideal destination for both young professionals and families alike. As you prepare to relocate from Austin, take a look at just a few of the reasons you will love making Dallas your new home. 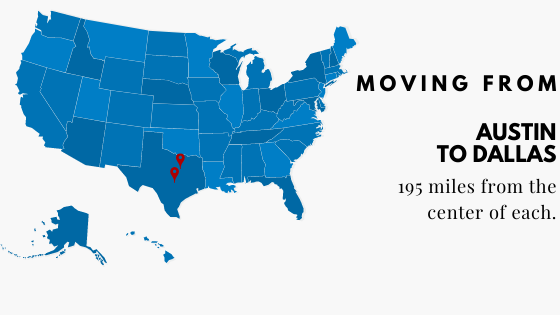 Benefits of Moving from Austin to Dallas

Whether you are a recent graduate or a long-time professional looking for a career change, Dallas is a great place to get a job for just about anyone. With 22 of the 500 largest companies in America located within the city, the metro area ranks among the top five cities for employment opportunities. Some of these Fortune 500 companies include American Airlines, AT&T, Exxon Mobil, Southwest Airlines, Bank of America, Lockheed Martin Aeronautics, and JP Morgan Chase & Co just to name a few. The local economy is supported by a number of thriving industries including defense, healthcare, financial services, energy, information technology, medical research, and telecommunications among others. Home to a number of corporate giants, Dallas is a great place for jobseekers.

As a transplant from Austin, you are already used to warm summers and you can expect much of the same here in Dallas. That said, the summer temperatures rarely top 100 degrees. Winters can get a bit chilly, but nothing too cold, meaning you get to experience a change of season without extremely cold winters. The warm climate is ideal for those who love spending time outdoors.

Dallas is home to some incredible food. From local taco joints to delicious barbeque and plenty of other Mexican delicacies, the city is a paradise for food lovers. There are plenty of fine dining options featuring excellent cuisine but you can also indulge in incredible fare without putting a dent in your pocket. There are loads of delicious food trucks and affordable restaurants located all throughout the city.

The Lone Star State is serious about its education and Dallas is no exception. You will find tons of public, private, and community-funded educational institutions in and around the Dallas-Ft. Worth area. In fact, 69 area high schools are recognized in the U.S. News and World Report’s Best High Schools rankings. You will also find opportunities for higher education as well, including the University of Texas and Southern Methodist University, which ranked among the top colleges in the country.

Sports fans will fall in love with the city’s exciting sports scene and it won’t take long to become a local fan. For starters the city is home to the five-time super bowl champion Dallas Cowboys, fondly referred to as “America’s Team.” You also have five other professional sports teams including the Dallas Mavericks, Dallas Stars, Dallas Wings, and FC Dallas. The city also plays host to several major sporting events including the Mexico National Team, college football games, e-sports competitions, and much more!

Cost of Moving from Austin to Dallas

Moving from one city to another can be expensive and that’s why it’s important to work with a moving company that is both professional and affordable. We pride ourselves on providing customers with exceptional service at a price that fits their budget. The average cost to move from Austin to Dallas with North American is $1,508.23. Of course, there are many variables that will determine the exact cost such as the actual distance of the move, the number of items being moved, and additional services such as packing and unpacking. The easiest way to get an accurate quote is by using our Quote on Demand listed above.

How to Move from Austin to Dallas

Moving Austin to Dallas requires a great deal of organization. It can be difficult to handle all of the logistics of moving from one city to another and that’s why it’s best to leave it to the professionals. North American has been moving customers for more than 90 years so we understand exactly what it takes to move between cities. From professional packing to worry-free transport, North American has you covered every step of the way. Relocating to a new city can be stressful and overwhelming and that’s why North American works hard so you can kick back, relax, and just focus on enjoying your new life in Dallas!

Call today to find out how North American can customize a moving plan just for you or start by filling out our Quote on Demand above!