Moving From Indiana to Florida

Moving from Indiana to Florida

Florida is one of the fastest-growing states to move to because of its weather, affordability, nightlife, and attractions. Florida has plenty to offer for everyone of all ages and has become more than a retirement state. Read on to find out more about moving from Indiana to Florida, the benefits, the cost, and how to move to the Sunshine State. 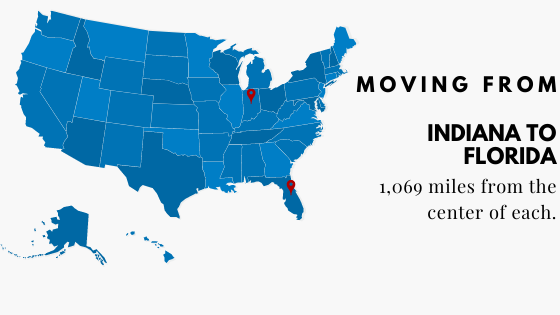 Benefits of Moving from Indiana to Florida

Many Floridians are proud that they “live where you vacation,” as the weather is warm year-round. The lowest temperatures tend to be in the winter, which is mild compared to the Midwest snow. The humidity takes some getting used to, but using the pool or going to the beach in December makes it worthwhile.

All around Florida’s coast is home to magnificent beaches with gorgeous blue waters that locals and tourists enjoy. The east coast has beaches with more nightlife since Miami Beach, Fort Lauderdale, and the Palm Beaches host younger crowds near Downtown. The west coast is more for an older crowd with resorts and retirement areas, with luxury beaches, such as in St. Petersburg, Naples, and Sanibel Island. Also, Florida has many “hidden gems” if you want to get away from crowds. Overall, the beaches are welcoming with lots of different food and people.

Florida is one of the most affordable places to live in, starting with its no state income tax, meaning more money in your pocket. There are more expensive areas, such as Miami and Key West, but North Florida presents more opportunities than South Florida. If you want to send your child to college, the in-state tuition for Florida universities is the most affordable, while Indiana is above the national average.

Florida’s humidity comes from the fact it’s swampland, home to the Everglades. Hundreds of species of birds, alligators, manatees, and more are visible at wildlife parks. The Everglades is a unique part of Florida, as its watershed system involves the Kissimmee River, Lake Okeechobee, and the Everglades. You can go on airboat rides through this system or in the Everglades to get the full experience of the swamp.

Some of the most popular theme parks are in Florida, notably Orlando, such as Disney World and Universal Studios. There’s also Busch Gardens and Adventure Island in Tampa. Waterparks are a fun excursion in Florida, which is another option to cool off instead of the beach.

Florida presents lots of outdoor activities, mostly water-based, such as fishing, snorkeling, boating, and diving, surfing, paddleboarding, and more. There are areas with rivers to hang out at, such as Devil’s Den. If you live in South Florida, the Keys are not too far, where many locals take weekend trips to go fishing.

Cost of Moving from Indiana to Florida

At North American, we understand how costly it is to move long-distance and we give you pricing upfront with competitive rates. The average line haul cost to move from Indiana to Florida with North American is $3,300.

However, many other factors determine the cost, such as the number of belongings being moved, specialty items, packing, and much more. The best option to get an accurate quote is using the Quote on Demand tool above. 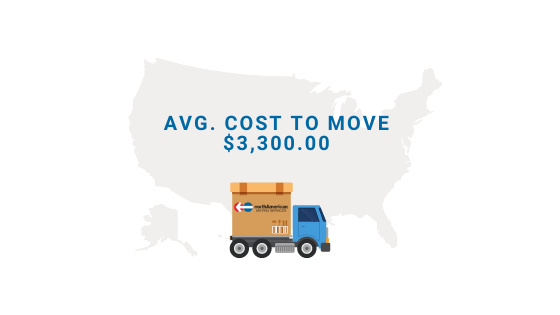 Most Popular Cities in Florida

Miami is the most diverse city in Florida, filled with unique cuisine, languages, and home to the Cuban exile community. It’s growing to become a financial and business center as more investments pour into the city. The party scene in Miami Beach down Collins Avenue is also a thrilling experience.

Known as one of South Florida’s most populous cities, Fort Lauderdale has excellent beaches and a bustling downtown with lots of nightlife. Many retirees live in Fort Lauderdale near the marina with their boats to enjoy the sunshine.

West Palm Beach is a growing area with affordable colleges and universities. It is mostly a scene with older adults and retirees, where there are lots of restaurants and activities to experience. The beaches are also less occupied than Miami and Fort Lauderdale despite being the northern part of the tri-state county area.

Tampa is in Tampa Bay along the Florida Gulf Coast with a bustling sports scene, boating, activities, nightlife, and more. Sarasota and St. Petersburg are not too far, where there are lots of sports bars, lounges, restaurants, and beaches.

You can probably spend weeks in Orlando and still have countless activities to do, as the city boasts tons of amusement parks, a Downtown nightlife scene, and nature parks. The city also is a growing technology hub with IT professionals and STEM education.

Pensacola is at the panhandle of Florida with beautiful beaches, wildlife, and historical attractions. This city is a great destination if you don’t want intense humidity, as Pensacola is Florida’s northernmost area.

Jacksonville is one of the most affordable cities to live in Florida, with lots of different seafood, beaches, nature, and nightlife. The city also has the third-largest military presence in the country, with thousands of active-duty employees living in NAS Jacksonville. Also, Jacksonville is the 2nd in job growth with lots of business, tech, finance, and more opportunities.

How to Move from Indiana to Florida

We know long distance moves can be stressful, which is why we create a personalized moving approach that suits your budget and needs. With over 85 years of experience, we have the knowledge and expertise to assist you along the way for a smooth transition into your new home. For a free quote, call North American today, and let us help you relocate effortlessly!