Moving from California to Austin

Moving from California to Austin

A booming tech scene, incredible food, endless sunshine, and access to live music are just a few reasons why Austin has become such a desirable place to live. You get all of this plus a vibrant one-of-a-kind culture at a price that is actually affordable! With so much to offer at such a reasonable price, it’s no wonder Austin frequently attracts transplants from California. As you prepare to embark on your own journey from California to Austin, here are just a few things you should know about living in this amazing city. 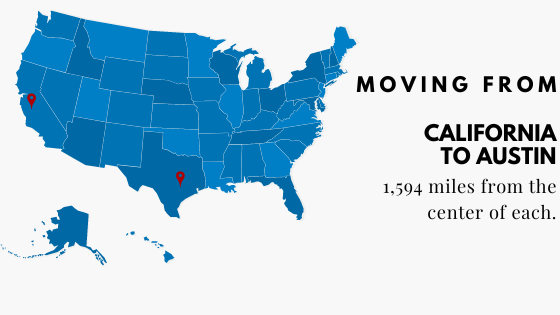 Benefits of Moving from California to Austin

Austin is among the fastest-growing cities in America and has seen tremendous growth across many sectors, especially the rising tech scene. With companies like Google and Tesla moving into the city, job growth in Austin is predicted to grow by more than 45% in the next decade. In fact, Austin proudly boasts the second hottest job market in the country. It is home to multiple Fortune 500 companies including tech giants such as 3M, Apple, Facebook, Google, and Tesla. It is also home to the headquarters for Whole Foods Market as well as a number of government jobs as well.

Not only is Austin a great place to land a career, but living here won’t break the bank. Named the 5th most affordable city in the U.S. in recent years, living in Austin costs significantly less than many other major cities around the country. In fact, the cost of living in Austin is 36% cheaper than L.A., 24% cheaper than San Diego, and a whopping 84% cheaper than San Francisco. Austin ranks as the No.1 city in the U.S. for homebuyers, with a wide variety of new homes priced between $200,000 and $600,000. What’s more, Texas is a very tax-friendly state which means transplants from California no longer have to worry about paying income tax.

The weather in Austin is quite favorable, especially compared to other Texas cities. The temperatures are far more moderate in Austin compared to cities like Houston and Dallas. The gently rolling hills surrounding the city help curb some of the heat compared to the flat landscape in other parts of the state. Summer can be hot and humid with temperatures rising above 90 degrees, but winters are mild with average temperatures in the mid-’60s.

Austin is the place to be for music lovers. Nicknamed the Live Music Capital of the World, Austin is home to more live music venues per capita than any other city in the U.S. Both residents and visitors can enjoy the city’s countless music festivals, concerts, and famed nightlife. Among some of the city’s most popular festivals are the Formula 1 festival, the South by Southwest/SXSW festival, the Austin Film Festival, the X Games, and the Austin City Limits festival just to name a few.

Austin is definitely a foodie destination and ranks among the top cities in the nation for food. You will find a variety of delicious eats from Texas comfort foods to fine dining. Austin also ranks No. 2 in the country for food trucks, with more than 1,400 registered mobile food vendors in the city. For those looking to indulge their need for good food, Austin’s incredible food scene will not disappoint. If that’s not enough to tickle your tastebuds, Austin is also home to an incredible variety of craft breweries and microbreweries.

Not only is Austin a great place to live, work, and play, but it is also a great city for getting an education. Home to the University of Texas at Austin, the city offers everything you want from a college town. UT Austin consistently ranks among the top 10 public colleges in the country. In addition to higher education, the Austin area also offers some of the best public school districts in the nation.

Cost of Moving from California to Austin

Moving from one state to another can be costly and that’s why it’s important to work with a moving company that is both professional and affordable. North American understands that it’s important to budget these moving expenses and that’s why we offer upfront pricing and competitive rates. The average line haul cost to move from California to Austin, Texas with North American is $3,900. Of course, there are many variables that will determine the exact cost such as the actual distance of the move, the number of items being moved, and additional services such as packing and unpacking. The best way to get an accurate quote is by using our Quote on Demand tool. 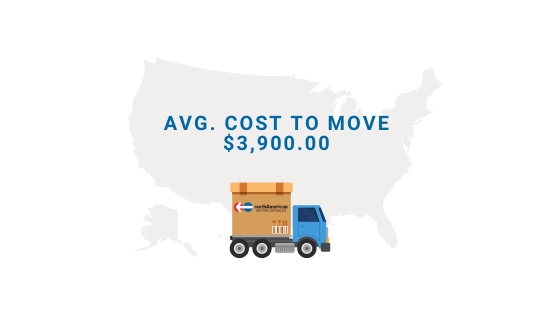 How to Move from California to Austin

Interstate moves require a great deal of planning and organization. That’s why it is recommended to enlist the help of a professional moving company when you are moving long distances. North American has over 85 years of moving experience and our professional movers are equipped to handle every aspect of your move from packing and loading to full transport and unpacking. Relocating can be stressful, but with the right help, your transition can be smoother and less hectic. North American is here to take the stress out of your move so you can start enjoying your new home in Austin.