You’ve seen it in movies, heard about it in songs, and read about it in books. We are talking about New York City. It is one of the most iconic cities in the world and has inspired people all over the world with its grandiosity. Abounding with some of the tallest skyscrapers and most historic landmarks, New York City really is as big as its reputation. It has an infectious energy unlike any other city in the world and is filled with incredible sights and sounds. Its long history as the reigning king of trade, finance, fashion, and entertainment has attracted people from all over the world who are looking to achieve their dreams.

Whether you are looking to expand your career and chase your dreams or you just want to experience the unique fast-paced lifestyle of the Big Apple, it won’t take long for you to discover why NYC is such a magical place. As you prepare to move from Chicago to New York City, here are just a few of the exciting amenities that await you. 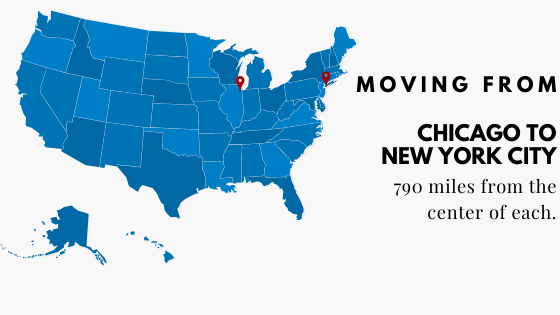 Benefits of Moving from Chicago to New York City

One of the greatest attributes of New York City is its vast diversity. Nearly 36% of the city’s population is from another country and there are more than 800 languages spoken in the city. Everywhere you go you will meet immigrants, transplants, or natives to the city and each will have their own unique story about how they ended up in NYC. The city’s unique neighborhoods also give you the opportunity to explore different cultures and different parts of the world without ever leaving the city. Experience the food, festivals, and cultures of various countries by visiting neighborhoods such as Chinatown, Little Italy, Little Guyana, Koreatown, Little India and so many more. It truly is America’s melting pot.

No matter your career, you will find endless job opportunities in New York City. It is a great city for those looking to make a career in technology, finance, fashion, modeling, advertising, PR, or marketing. There are hundreds of companies headquartered in New York including JP Morgan Chase, Citigroup, ABM Industries, Pfizer, Carl Icahn, Philip Morris International, Omnicom Group, MetLife, NBCUniversal, American Express, AIG, and so many more. Whether you are dreaming of becoming a star on Broadway, you want to work for a major fashion designer, or you want to advance your career in finance, NYC is the premier destination for those looking to chase their dreams.

Easy to Get Around

Although it is the most populated city in America, it is also one of the most convenient. New York has the most developed public transportation system in the country, making traveling around the city a breeze for residents. You can easily get wherever you want to go in the city using the subway, bus, or train. It is also extremely walkable, making it possible to live in the city without ever owning a car. If you like to travel, you’re also in luck because New York has three airports with direct flights almost anywhere in the world!

New York has an energy unlike any other city in the world. The fast pace, the buzzing traffic, and the hustle and bustle of the people make it one of the most vibrant places on earth. Dubbed “the city that never sleeps,” New York is unique in that you can always find fun things to do or places to eat no matter what time of day it is. It is one of the few places in the world where you can get a manicure, hit the gym, or dine at a sit-down restaurant at midnight.

It’s the backdrop of countless movies and TV shows and the sights of the city are truly something to behold. New York City is home to some of the most iconic landmarks in the world including the Statue of Liberty, the Empire State Building, Grand Central Station, Central Park and the list goes on. There is something incredible to discover around every corner and no matter how long you have lived in the city, it’s still exciting to take in the views of these incredible landmarks and the New York City skyline.

There’s Always Something to Do

New York is one of the most lively and exciting cities in the world and you will never run out of things to do. The city offers the best shows, concerts, festivals, and events of anywhere in the country so there is truly something for everyone. In addition, the Big Apple is home to some fabulous museums including the world famous Metropolitan Museum of Art, the 9/11 Memorial Museum, and the American Museum of Natural History. Sports enthusiasts will also get their fill as they join in the excitement of cheering on one of the many professional sports teams such as the Knicks, Liberty, Giants, Jets, Yankees, Islanders, and so many more. It is also a shopper’s paradise complete with everything from boutique shops to big-name brands on the world famous Fifth Avenue. Foodies are also in luck because there are loads of incredible eateries in New York City. From world-class dining to local dives and international delights, NYC’s food options are endless.

Cost to Move from Chicago to New York City

Moving can be expensive and that’s why it’s important to set a budget to stay on track. At North American, we understand the need for affordable moving services and that’s why we offer competitive rates and upfront pricing. The average cost to move from Chicago to New York City with North American is $2,299.95. It is important to keep in mind, however, that many factors go into determining the cost of a move including the exact distance you are moving, the number of items being moved, special shipping or handling needs, and additional services such as packing and unpacking. At North American, we understand how important it is to stay on budget and that’s why we have made it easy to get an accurate quote using our Quote on Demand tool. 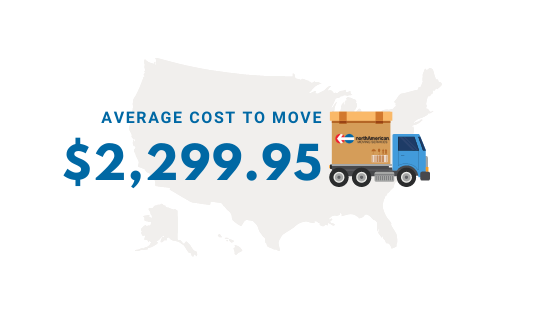 How to Move from Chicago to New York City

Long distance moves require a great deal of planning and organization. This can present a number of challenges and create additional stress. That’s why it is recommended to enlist the help of a professional moving company when you are moving a long distance. North American has over 85 years of moving experience and our professional movers are equipped to handle every aspect of your move from packing and loading to full transport and unpacking. Relocating can be stressful, but with the right help, your transition can be smoother and less hectic. North American is here to take the stress out of your move so you can start enjoying your new home in New York City!