Moving from California to Georgia

Moving From California to Georgia

Relocating from California to Georgia is quite the commitment because you’ll be moving from one coast to the other. As different as California and Georgia might seem, you’ll be pleased to know you won’t be sacrificing sunny skies and sandy beaches for the move.

Whether you’re moving for professional or personal reasons, there is so much for you to look forward to as you begin life anew. You’ll be calling Georgia home before you know it! 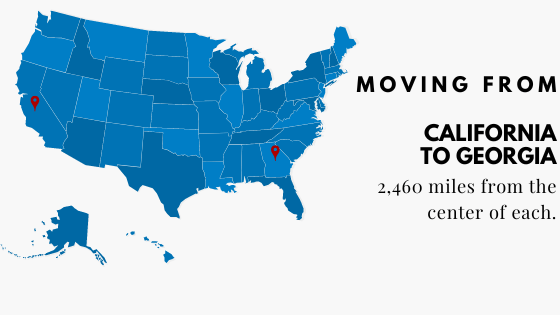 Benefits of Moving From California to Georgia

When it comes to moving to Georgia from California, there are more pros than cons. From cost of living to things to do, Georgia has it all.

Georgia has activities you can’t find anywhere else. From visiting historic locations to seeing a real-live whale shark up close, Georgia is a hub for everything fun and exciting.

Fans of Coca-Cola know the company has roots in Atlanta. Because the company’s roots run so deep, they have a museum in Georgia’s capital called World of Coca-Cola. This 20-acre complex showcases the company’s history and has fun, interactive activities like learning about the connection between scent and taste.

A fun “must-do” at the World of Coca-Cola is their Beverage Tasting Experience. You’ll have the chance to taste Coca-Cola family beverages from around the world and learn about them. Don’t forget to check out the Coca-Cola store to buy cool merchandise.

Conveniently located next to the World of Coca-Cola, this world-class aquarium is arguably one of the best in the United States. After all, it’s the only aquarium in the nation that has whale sharks on exhibit.

Conversely, if you’re opting to rent, rent is also lower in Georgia than in California. On average, the median rent in Georgia is cheaper than in the rest of the United States. The average rent in Georgia is about $1,633 per month. Most rentals are single-family homes and were built between 1970 and 1999.

Thanks to tax credits for filmmakers, Georgia is home to several TV and film productions. Many Marvel movies were filmed in Georgia, and popular TV shows like “The Vampire Diaries” and “The Walking Dead” were also filmed here. You can do tours of locations from the shows!

Prefer to take part in the action? You can apply to be a crew member or extra, even with no previous industry experience.

Living in California means you’re accustomed to sunny beaches and beautiful coastal views. Moving to Georgia doesn’t mean you have to sacrifice the water. Georgia has many gorgeous beaches including:

Cost of Moving from California to Georgia

Regardless of how far you’re moving, the cost is an essential factor to consider. Calculating the cost of packaging, moving and storage can be overwhelming. Booking a professional moving company not only eases your worries but takes a lot off your plate.

Although there are many variables to consider when calculating the cost of a move, the average linehaul moving cost from California to Georgia is $4,500. However, the best way to figure out the actual cost of your move is to fill out our Quote on Demand form above. North American works with our customers to create a moving experience that’s just right for them and their budget.

Most Popular Cities in Georgia

The entire state of Georgia is beautiful, and you can’t go wrong with which city you find yourself in. However, like any other place, some cities are more popular than others, whether it’s for economic or personal preferences.

Atlanta, colloquially known as “Hotlanta,” is Georgia’s capital and most populated city. The Hartsfield-Jackson Atlanta International Airport is the world’s busiest airport based on passenger traffic, a distinction held since 2020.

It’s home to the American Civil Rights Movement, with many iconic American figures such as Martin Luther King Jr. calling Atlanta home. Aside from its rich and storied history, the city also has fabulous restaurants, fantastic nightlife and sports culture.

Speaking of sports culture, if you’re a fanatic, you’ll be pleased to know Atlanta is home to the NFL’s Falcons, the Atlanta United MLS team, and the MLB’s Braves.

At almost three centuries old, Savannah is one of the South’s most historic cities and the oldest city in Georgia. Additionally, people consider it one of the world’s friendliest cities.

If you’re interested in arts, the city is home to Savannah College of Art and Design (SCAD). SCAD is a prestigious private art school that has helped mold creative talents across the industry, including comic artists, architects and photographers.

Whether you’re looking for art and culture or exciting nightlife, Savannah is the place to be.

Athens is a college town known for its museums, craft breweries and live music. Home to the University of Georgia, you’ll find the Sanford Stadium in Athens. It’s the 10th largest stadium in the NCAA and has a wonderful, lively atmosphere on game days.

There are many activities for families to enjoy, including visiting the famous Tree That Owns Itself, the World of Wonder Playground, and the State Botanical Garden of Georgia.

How to Move From California to Georgia

Moving is always stressful, even for the most prepared individual. To minimize your burden, we recommend enlisting the help of professional movers early. North American has over 88 years of experience and knows what it takes to execute a move across the country flawlessly.

Call North American today so we can help you start your new adventure in Georgia.