If you are planning a move to Houston, know that you aren’t alone! Houston is the fifth-largest city in the country and has been ranked among the fastest-growing cities for the past two decades. Houston attracts sports fans, food lovers, outdoor enthusiasts, and young professionals looking to expand their careers. Offering a hot job market, low cost of living, and year-round sunshine, it’s no wonder Houston is such an attractive city for so many. As you prepare to relocate from New York City, here are just a few reasons why you will love making Houston your new home. 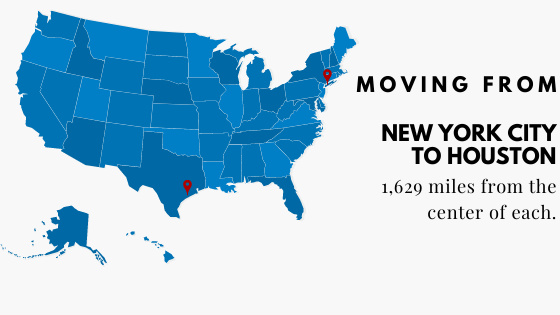 Benefits of Moving from New York City to Houston

Houston is home to the second most Fortune 500 companies in the country. New York is the only city that has more. That means Houston offers a wealth of opportunities for high-paying and highly-skilled jobs. These jobs are available across a variety of industries including healthcare, education, aerospace, and energy. In fact, Houston is known as the “energy capital of the world,” and is home to more than 5,000 energy corporations. The city is also a great environment for small businesses and entrepreneurs.

Not only is Houston a great place to find employment, but residents can actually afford to live, work, and play here! Houston’s cost of living is far lower than many other major cities, including New York City. In fact, it’s nearly 49% cheaper to live in Houston than in New York City! Compared to the nation’s 20 most populated cities, Houston has the second-lowest overall cost of living. Housing costs are also a whopping 267% higher in NYC! Combine a reasonable cost of living with a median household income that is slightly higher than the national average, and you have a city that can support families and individuals looking to enjoy a high quality of life.

Families looking to move to the Houston area will be happy to know that the city’s schools have a solid reputation for delivering high-quality education. In addition to the city’s strong public school system, there are more than 300 private schools and 14 institutions of higher learning to choose from, including the highly respected Rice University and Houston University.

Among Houston’s many amenities is its high-quality healthcare. Houston is home to a number of world-renowned facilities including Houston Methodist, Baylor St. Luke’s Medical Center, Memorial Hermann, Texas Children’s Hospital, and M.D. Anderson Cancer Center and Texas Medical Center just to name a few. Many of these hospitals are ranked among the best in the world and provide a wide array of doctors and specialists who can provide leading medical care.

Get ready to trade in those harsh NYC winters for year-round warmth and sunshine! Temperatures only fall below freezing for about one week out of the entire year. While summer temperatures can top 90 degrees, there are a number of days throughout the year when the temperatures hover between 70-80 degrees. This allows residents to enjoy the city's many attractions and outdoor activities all year long.

Though it’s tough to rival the food scene in NYC, Houston definitely gives New Yorkers a run for their money. With a reputation for TexMex and BBQ, residents can enjoy endless varieties of these local favorites. The city also features ethnic cuisine from all over the world, Jame Beard award-winning chefs, and plenty of unique dishes you can only find in Houston. There are so many places to eat, you could literally eat at a new restaurant every night without ever running out of options!

Life in Houston is anything but boring. Part of what makes the city so desirable is the vast amount of things to see and do. One of the most iconic attractions is the Houston Livestock Show and Rodeo, as well as numerous museums including the Natural Science Museum, the Space Center, the Downtown Aquarium, and the Houston Zoo. Sports fans will also have plenty of professional teams to cheer for, along with its hometown colleges. There is also a vibrant theater district, fabulous shopping, and plenty of green spaces to enjoy some time outdoors.

Cost of Moving from New York City to Houston

It can be costly to plan a cross-country move but North American works to provide customers with a customizable moving package to fit any budget. The cost of a cross-country move is dependent upon many variables but the average line haul moving cost from New York City to Houston with North American is $3,300. Many factors play a part in determining the cost such as the exact distance of the move, the number of rooms being moved, and additional services such as packing and unpacking. You can start by getting a free quote using our Quote on Demand tool above or call today to schedule your free estimate.

How to Move from New York City to Houston

Moving such a long distance can be both exciting and stressful. Long-distance moves present a number of logistical challenges, but North American is available to help make your move as efficient, affordable, and stress-free as possible. Interstate moves require a little extra help and planning and that’s why it’s important to work with a professional moving company like North American. Our experienced movers are fully equipped to handle the logistics of your long-distance move and can help you every step of the way from start to finish.

Call today and find out more about how North American can assist you with your cross-country relocation.