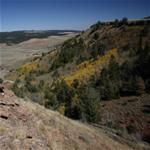 Casper, situated in east central Wyoming at the foot of Casper Mountain, is a playground for outdoor enthusiasts. It has been nicknamed “The Oil City,” due to its long history of the oil boom and cowboy culture. Today, residents embrace its stunning natural landscapes, filled with wildlife, art venues and adventure.

Casper is the second-largest city in Wyoming, according to the 2012 U.S. Census, with a population of approximately 58,000. The majority of residents work in construction and retail trade.

Residents of Casper enjoy a four-season climate, which fosters year-round activities. During the winter, temperatures average 20 degrees while highs reach mid-80s in the summer.

Activities and attractions in Casper

Casper offers a wealth of outdoor opportunities. Shred through forest trails snowmobiling, go boating on Alcova Lake with the family or take to the slopes at Hogan Ski Area. No matter what time of year it is, you’ll be sure to experience unforgettable mountain landscapes that are home to a variety of wildlife, including deer, antelopes, buffalo and geese.

At the National Historical Trails Interpretive Center, you can check out Casper’s rich frontier history that covers mountain men to Native Americans who lived in the area during the mid-1800s. As a gateway to the Wind River Reservation, the city serves as a great place to dive into Native American heritage. For example, did you know that the earliest known inhabitants of Wyoming are the Clovis, who lived here 12,000 years ago?

The arts are also thriving in this mountain town. Embrace oil-paintings at the exhibit at Bank of the West, run through Casper Artists’ Guild. Once spring rolls around, you won’t want to miss shows at the Casper Planetarium, which released entertaining movies for only $2.50 for admission.

When relocating to your new home in Wyoming, let North American Van Lines do the heavy lifting. By choosing northAmerican as your Capser moving company, you’ll have access to 2,700 drivers, 380 international agents and a long list of available services, including full-service packing, self-pack material sales and box and furniture inventory.

Conveniently for flyers who are having their vehicles transported by northAmerican, the nearest airport is Casper-Natrona International, located on the edge of town. If you’re driving, the city is accessible via Interstate 25 and State Highway 20.

The Agents at North American know how tough a transition to a new city can be, so don’t hesitate to contact an agent today.