Moving and Relocation Guides
Relocating with a lump sum benefit?
Are you a mobility leader looking for a moving partner, or an employee relocating with your company?
Contact our moving experts now and get started.
TALK TO AN EXPERT 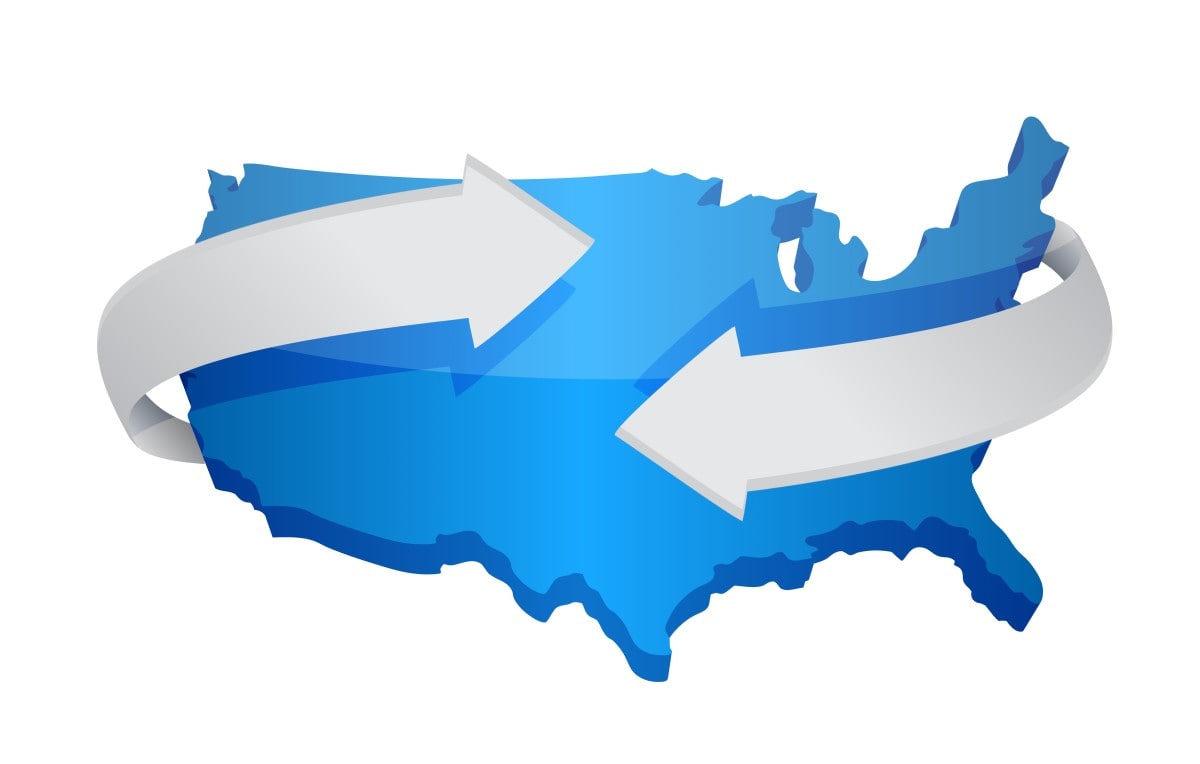 States in the Northeast Lead in Outbound Migration

Four of the seven states with the most outbound moves on our list are in the northeast and importantly, states from this region did not make an appearance in our top eight for inbound moves either. Of the northeastern states, New York had the most residents leaving, with New Jersey coming in second. California prevented the northeastern sweep by coming in fourth for most outbound moves, with Maryland taking our fifth spot. Importantly, Maryland has been a frequent guest on our outbound states list, ranking between second and fifth since 2015. Expanding our view, Pennsylvania and Michigan have also been fairly consistent in their appearance on our top ten in recent years and continued that tradition in 2020 as well. As the dust of the pandemic continues to settle into 2021, it will be interesting to see where these states find themselves in next year’s rankings.

There are a few reasons why people may be leaving these states:

The Sunbelt and Southern States Continued to Welcome New Residents

In recent years, southern states have consistently ranked high on our inbound moves lists. In 2020, southeastern, southern, and southwestern states continued to grow their populations as they welcomed more residents than they lost.

Since 2015, both Arizona and South Carolina have been in the top five inbound states, and this year, they took second and fourth place respectively. North Carolina, another consistent favorite for migratory Americans remained popular, taking our fifth spot for 2020 inbound moves. Tennessee made waves this year, crooning its way up from number five to number three on the list.

Having been consistently in our top 12 since our first report in 2015, Florida and Texas have breezed through the ranks year over year. This pattern continued despite the unusual conditions of 2020, with Florida grabbing number six and Texas staying lucky at number seven.

One southern state that didn’t pull out of its downward trajectory was Georgia. While the peachy state had made our top eight in years past, it has failed to do so since 2018 and this remained unchanged into 2020. Despite this, the south overall has shown itself to be an enduring region for Americans who are on the move and we don’t see this changing anytime soon.

Many of the reasons for the south’s growth in popularity are juxtaposed by those driving both the northeast and California’s outbound moves.

Since we began this annual study in 2015, midwestern states have made an appearance on our outbound list each year. The midwestern state most of note this year is Illinois. The Land of Lincoln has held its spot at #1 for outbound moves for three consecutive years.

Also of note is Michigan, which while not in the top 5, has consistently made the top 10 since 2015. So while the numbers may not be robustly dramatic for a given year, it is important to mention that for Michigan, it appears to be a long-running pattern of significant resident losses that are not counterbalanced by commensurate inbound moves.

Like the Northeast, the Midwest is home to harsh winters, though other reasons seem to be driving these figures:

As we look back at our data over the past years, Western states seem to consistently draw in new residents. Interestingly, while much stayed the same in the west, Nevada, Oregon, and Washington, did not make the list this year for inbound moves, which is a break from past years.

According to our data, the western states welcoming the most new residents year-over-year are Idaho and Colorado. Colorado has had a slow and steady rise on the inbound moves list over the years. This year, Colorado grabbed the #8 spot on the inbound list. Texas also remained popular in 2020 at #7 on our inbound list.

Since 2015, Idaho has made the top 10 inbound states list while Colorado has either done the same or been close, depending on the year. In recent years, Idaho has claimed the number one spot for most inbound moves and that remained unchanged in 2020 with the potato state remaining hot in first place.

But why Idaho? Here are just a few reasons people are flocking there:

To that point, we would be remiss if we didn’t expand on the current state of outbound moves in California when discussing western states. Since 2017, California has consistently made our top five outbound states list each year. While its exact spot has fluctuated within that top 5, there is no question that despite its populousness, the Golden State is losing residents at an astonishing rate year-over-year.

The inordinately expensive cost of living and exorbitant home prices in California’s major cities seem to be mostly to blame. Notably, San Francisco where a family of four is considered at poverty level when making over $100,000 a year, had a net +30% of outbound moves when compared to inbound this year. When coupled with the COVID-19 pandemic and record wildfires in the state, job loss, reduced hours, and future economic uncertainty may have proved too much to bear for some. In fact, for many white-collar workers in California, the pandemic showed itself to be a catalyst and for some, an opportunity as companies decided to switch to long-term, remote-first working arrangements for their teams. Many workers, especially in tech, jumped at the opportunity to lower their cost of living while maintaining their salaries and likewise, the companies that employ them are also moving elsewhere for similar reasons.

Top Moving to and From MSA (Metropolitan Statistical Area) Areas

In looking at the data for metro areas that include outlying suburbs of larger cities, we were not surprised to see Phoenix at number one for top inbound destinations. The city named for the bird of myth has held this spot for four of the last five years. 2018, was the only year Phoenix’s metro area didn’t make it to first place (Houston metro grabbed the top 2018 spot.)

Two of the top MSA destinations in 2020 were in Texas. The warm climate and low taxes of the Lonestar state have made it popular in recent years.

For this report, we reviewed data for household moves in and out of the states. We focused on states with a high proportion of inbound or outbound moves, and we set an absolute value of 400 or greater. By setting that value, we took out smaller states that may have had fewer moves but a larger proportion.

A note on the expected versus the actual impact on move volume as a result of the pandemic:

Our initial inclination, like many other businesses at the outset of the pandemic, was that volume may sharply contract. In reality, while we experienced a slight decrease in volume during a couple of Spring months, overall our moving volume was on par with 2019. Despite COVID-19 and subsequent restrictions, consumer moves remained strong. One reason for this may be indicative of Pew Research’s findings that 22% of American adults either moved as a direct result of the pandemic or know someone who did. So instead of hampering relocation outright, the pandemic may have acted as a catalyst to relocate for some.

For more information on relocation and moving services from northAmerican, contact Bobbi Maniglia.